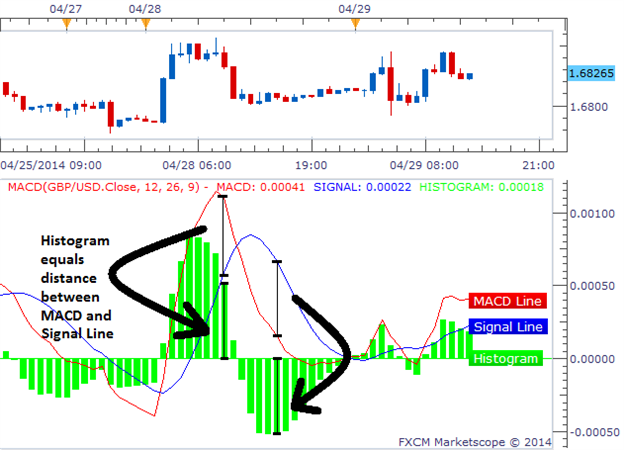 Most technical traders have experience using the more popular oscillators, RSI, CCI, and MACD, etc. But many traders I’ve taught are not aware of the alternative way to use the MACD. In this article we will discuss how to use MACD’s histogram to open trades and show how in many cases we can get a quicker entry than the traditional MACD method.

What Does the Histogram Represent?

How to Enter Based On the Histogram

So how can we read the histogram to generate trade signals? We first want to track the histogram as it moves away from the zero line, in other words, track it as its bars grow larger. The actual signal comes when the histogram no longer gets larger and produces a smaller bar. Once the histogram prints a smaller bar, we look to trade in the direction of the histogram’s decline. We can see an example of this in the chart below: 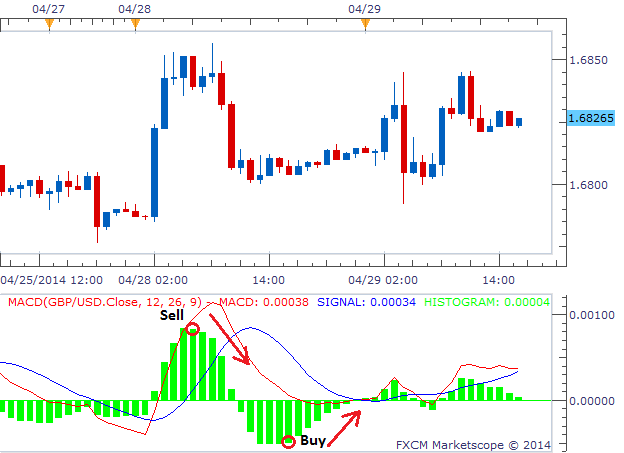 The Sell signal on the left was created by four growing bars in a row followed by a fifth bar that closed smaller. Five bars later, we see the MACD line crossing below the Signal line which is a traditional MACD signal. This later signal would have missed a majority of the move that the Histogram signal would have caught. Therefore, using the histogram as a signal can earn us a greater number of pips.

The Buy signal on the right is a similar story. We saw four bars growing consecutively until a 5th bar was created that equaled the 4th. We want to wait until a bar is smaller, so the trigger would have been presented after the 6th bar closed. This buy trade came several bars before the MACD/Signal cross and gave us a better entry as well.

Once we are in the trade, we can use sound Money Management to close out the trade appropriately.

And The Rest is Histogram

This entry strategy is fairly straight forward and can quickly be adopted by a technical trader. Have you traded in the forex market before? If not, test out this trading technique using a FREE FXCM Demo account. There is no risk and you can be up and running in minutes.

Sign up for my email list to stay up to date with my latest articles and videos.

Take this free 20 minute “New to FX” course presented by DailyFX Education. In the course, you will learn about the basics of a FOREX transaction, what leverage is, and how to determine an appropriate amount of leverage for your trading.

The Three Most Popular Indicators for Day-Trading