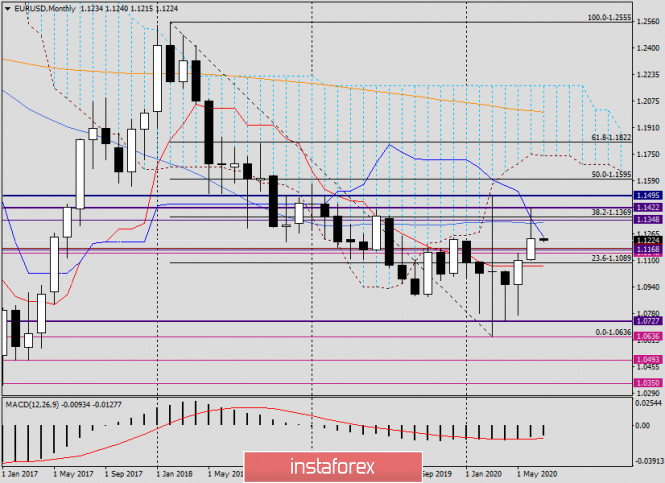 So, yesterday the market closed the first summer month, however, before we go to the analysis of price charts, let’s briefly talk about the fundamental background. Preliminary data on the consumer price index in the Eurozone exceeded economists’ forecasts of 0.1% and came out at 0.3%. At the same time, the base value of the index met expectations and amounted to 0.8%. As for American statistics, the consumer confidence indicator grew more than expected 91.8 and amounted to 98.1. The main emphasis in his speech yesterday in a six-month report to the House of Representatives, Chairman of the Federal Reserve System (FRS) Jerome Powell made on lending to small and medium-sized businesses. According to the head of the Federal Reserve, an unprecedented lending program will allow in the coming months to increase economic activity and reduce the losses that firms suffer as a result of the COVID-19 pandemic.

As for colleagues from the ECB, they do not exclude the possibility of adjusting previously adopted anti-crisis programs to counter COVID-19, but much will depend on the ability of global markets to adapt to the slow and gradual economic recovery in Europe.

Today, on the first day of July, Germany will report on retail sales and publish data on the labor market. However, it seems that the most important event will be the publication of the minutes of the last FOMC meeting, which will take place at 19:00 London time.

During the first month of summer, the main currency pair of the Forex market ended with growth, closing June trading at 1.1233. However, this does not mean that the strengthening of the exchange rate will continue. The main reason for such doubts is the very long upper shadow of the candle that closed yesterday. Usually, when the upper shadow is larger than the body itself, this is perceived as a negative signal and the weakness of the players to increase, who were unable to keep the price near the reached highs.

It is also worth paying attention to the strong resistance provided by the 50 simple moving average and the Kijun line of the Ichimoku indicator. And the maximum values of June trading at 1.1422 still look unattainable, the rebound down from this level was too strong. Now, to confirm the seriousness of their intentions, the EUR/USD bulls need to break through the resistance of sellers at 1.1422 and close the July trades above this level. At this stage, this task looks very difficult, and, given the long upper shadow of the last candle, the descending scenario gains more chances for its implementation. In my opinion, the breakdown of the Tenkan line (1.1065) and the closing of July trading under this line will finally indicate the superiority of the bears. 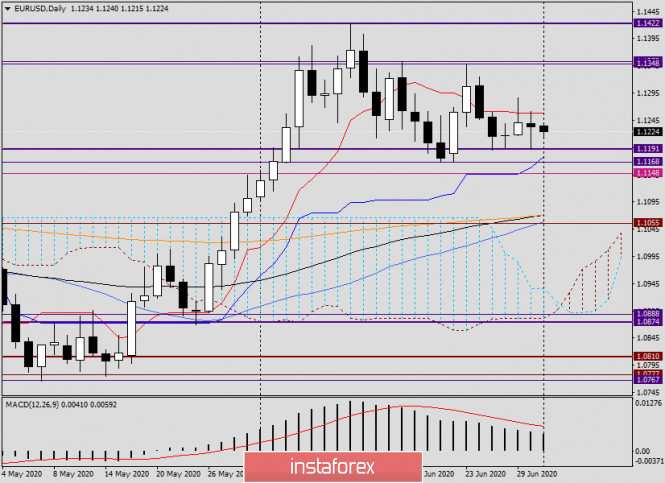 At yesterday’s trading, the pair showed multidirectional movements, which is not surprising given the month’s closing. The pair were not allowed to go up again by the Tenkan line of the Ichimoku indicator, which looks like a kind of barrier and does not allow the price to go higher.

However, before this, the quote showed a decline and fell to the level of 1.1190. By the way, this mark was indicated in yesterday’s review as the nearest reduction target and the level from which you can try to buy. As you can see, the pair did not fail and everything was clearly and accurately worked out. Here is just an idea of the future direction of the euro/dollar. 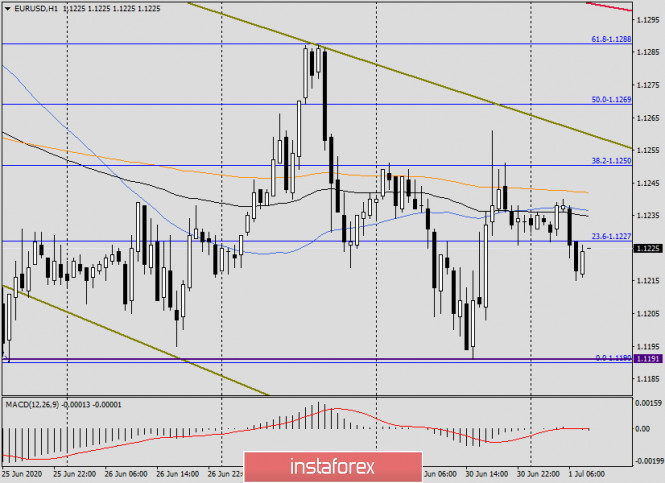 At the hourly chart, as expected, the moving averages used (89 EMA, 50 MA, and 200 EMA) blocked the pair’s path in the north direction. At the end of the review, the euro/dollar pair is strengthening and it is highly likely to test the moving averages again for a breakout. And along with them, the resistance line drawn at points 1.1348-1.1287.

The main trading recommendation for EUR/USD today is sales from the price zone of 1.1235-1.1255, and confirmation for opening short positions will be the appearance of bearish candle signals in the selected zone.