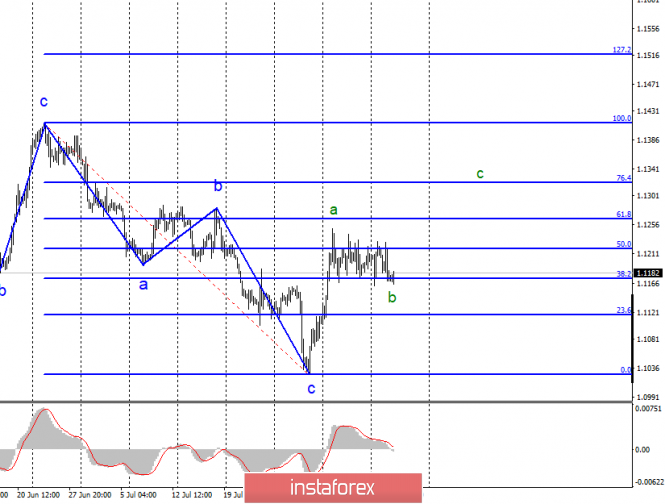 Tuesday, August 13, ended for the EUR / USD pair with a decrease of 40 bp, which does not specify the current wave counting. As before, the euro-dollar pair remains within the framework of constructing the proposed wave b as part of at least a 3-wave upward trend section. An obstacle to the construction of a wave c can only be a news background that supports the US currency with enviable regularity. For example, yesterday in America, the inflation report for July was higher, which turned out to be higher than the expectations of the foreign exchange market. And today, it became known that Donald Trump “relented” on China and postponed the introduction of duties for $ 300 billion from September 1 to December 15. It should be understood that Trump now needs to think not only about the trade war with China, but also about the voters, because new presidential elections are coming already in 2020, and Trump really wants to be re-elected for a second term. However, preliminary polls and studies show that Trump is unlikely to win the presidential race. Accordingly, the current president of America should think about how to increase his political rating. The rise in the price of goods from China that are in demand in America will be negatively perceived by the electorate. Therefore, under the auspices of caring for the population on the eve of the Christmas holidays (which are still a few months away), Trump has postponed the introduction of regular duties.

The euro-dollar pair continues to build the upward trend section. Thus, I recommend buying a pair with targets near the calculated levels of 1.1264 and 1.1322, which is equal to 61.8% and 76.4% according to Fibonacci signal, and based on the MACD signal upwards, counting on the construction of the ascending wave s. 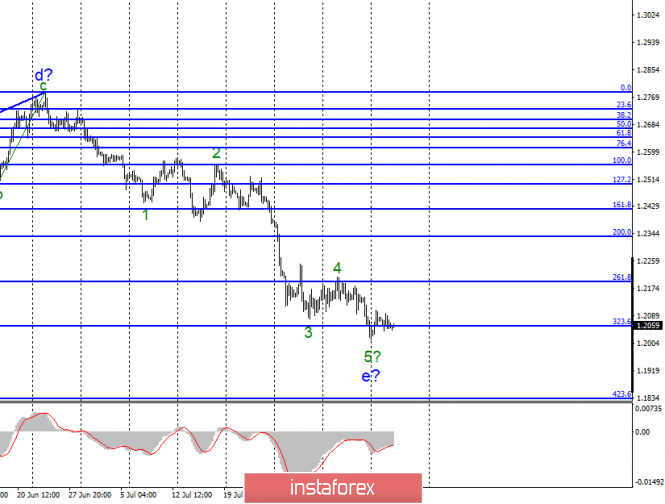 On August 13, GBP / USD pair lost several base points. A rather sluggish departure of the pound-dollar quotes from the reached minimums indicates the willingness of the foreign exchange market to continue to get rid of the pound further. If this is true, then the decline in the instrument will continue with targets located near the Fibonacci level of 423.6%. The wave e, in this case, will take an even more complex form. The news background continues to support precisely the American currency, creating strong pressure on the British currency. Thus, wave marking for a long time already implies the completion of the bearish trend. However, markets continue to get rid of the pound, which leads to a regular complication of the downward set of waves.

The downward section of the trend became more complicated, and the pound-dollar pair made a successful attempt to break through the 323.6% Fibonacci level. Despite the fact that the wave e again looks complete, it can take an even more complex form. Thus, with the new MACD signal down, I recommend selling a pair with targets near the 1.1830 mark, which corresponds to 423.6% Fibonacci.

Source:: Analysis of EUR / USD and GBP / USD for August 14. A new round of escalation of the trade war between China and the United