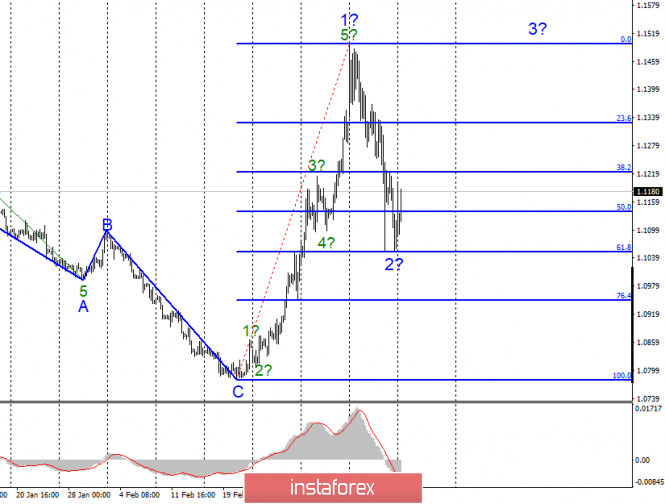 On March 13, the EUR / USD pair lost another 65 basis points and completed the second attempt to break through the Fibonacci level of 61.8%. Since the attempt was unsuccessful, new reasons appeared to suggest the completion of the construction of the alleged wave 2 or b as part of a new upward trend section. If this assumption is correct, then the increase in quotes will continue from current positions with minimal targets located near the level of 0.0% Fibonacci. At the same time, one should not forget that the markets are now in a panic state. Therefore, construction of more ambiguous wave structures is possible than I assume now.

The news background for the EUR / USD instrument on March 13 was very weak. However, the markets did not need any particularly strong news background to continue to trade the euro/dollar instrument down. Well, the key event did not happen on Friday, but on Sunday, the Fed decided to lower the key rate by another 1.00% for the second time in a row, without waiting for the scheduled meeting. In addition, Jerome Powell announced the resumption of a quantitative easing program worth about $ 700 billion. Thus, the Fed will now by all means stimulate the US economy, trying to prevent its slowdown or at least minimize the negative consequences of the epidemic. Will it be possible to do this? The economic statistics for March will show. So far, I can note that the demand for the American currency is supposedly to decline now. This decrease should be enough to complete the construction of wave 2 and move on to the construction of a new upward wave. However, given the current state of the markets, this may not happen. I would also like to note the speech of Jerome Powell, whose rhetoric was excessively “dovish”. The Fed President said that the coronavirus epidemic will have very serious consequences for the global economy and the US economy. Thus, we need to wait now for official statistical information to track the real impact of the virus on the economy.

The euro-dollar pair is supposedly continuing the construction of the upward section. Based on the current wave marking, waves 1 and 2 have completed their construction. Thus, if it were not for the panic state of the market, I would recommend to start buying Eurocurrencies in the calculation of building wave 3 of the upward trend section with targets located about 15 of the figure and above. However, in the current environment, I believe that markets should be careful above all. 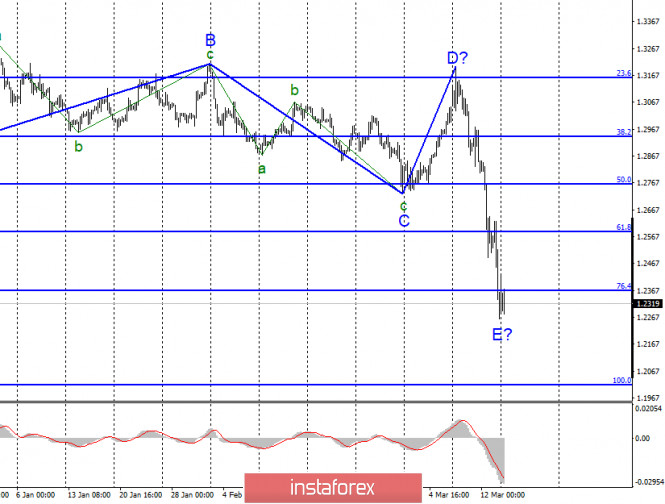 On March 13, GBP / USD lost about 310 basis points. Thus, the construction of the proposed wave E as part of the non-standard 5-wave downward wave structure continued. Given the size of wave E, it can already be completed or is nearing completion. However, the panic state of the market can easily lead to the fact that wave E will become even more complicated, as well as the entire bearish set of waves, which has already acquired a very ambiguous form.

There was no news background for the GBP / USD instrument on Friday. Nevertheless, panic in the markets persists. In the past two days, the Briton has fallen by 500 points, which is not normal for the normal state of the market. Thus, the highest trading amplitude continues to deter, and the complete uncertainty in the prospects of the instrument does not add a desire to trade. If the EUR / USD instrument has at least some kind of trading logic, and the wave marking looks more or less stable and clear, then everything can change at any time for the pound. It’s too late to sell now, and it’s dangerous to buy, because it is not clear how long the E wave will turn out. There is no news background for the instrument on Monday. An emergency cut in the Fed rate would have to lower the demand for the dollar, but, as we see, has not yet lowered.

The pound / dollar instrument continues to complicate the current wave count. Thus, I still do not recommend trading, as the situation in the markets is very unstable. After completing the construction of wave E, using the MACD signal “up”, it will be possible to consider the possibilities of buying the instrument. However, the main problem now is that it will be very difficult to determine the completion of both wave E and the entire downward trend section.