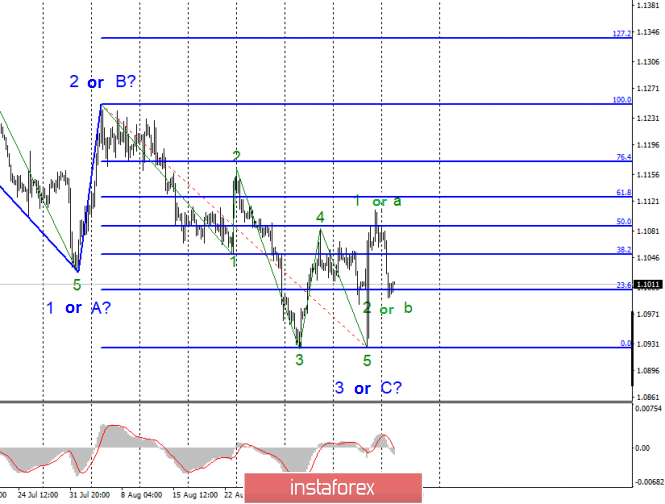 Monday, September 16, ended for the EUR / USD pair with a decrease of 75 basis points. The news background on Monday did not at all imply such strong movements, as it was simply absent. However, from the point of view of wave marking, everything turned out very well. The minimum from yesterday can be considered at least the expected wave 2 or b as part of a new upward trend section. If the current wave marking is correct, then the increase in quotations will resume from current levels within the wave with targets located above 11 figure.

On Monday, the time has come for a correction on the EUR / USD instrument. Despite the fact that there was no news background, the markets found the strength to close part of the purchases and even sell the pair. Today is the last day before the Fed meeting, at which everyone is waiting for Jerome Powell to declare a key rate cut. So wave 2 or b should end today to match the news background and current wave count. An unsuccessful attempt to break through the 23.6% Fibonacci level, built on the size of wave 3 or C, indicates the readiness of the forex market for new purchases. If the euro-dollar pair continues to fall today, or the market’s reaction to the Fed’s meeting tomorrow is not the pair’s growth, then the wave picture will most likely require corrections and additions. 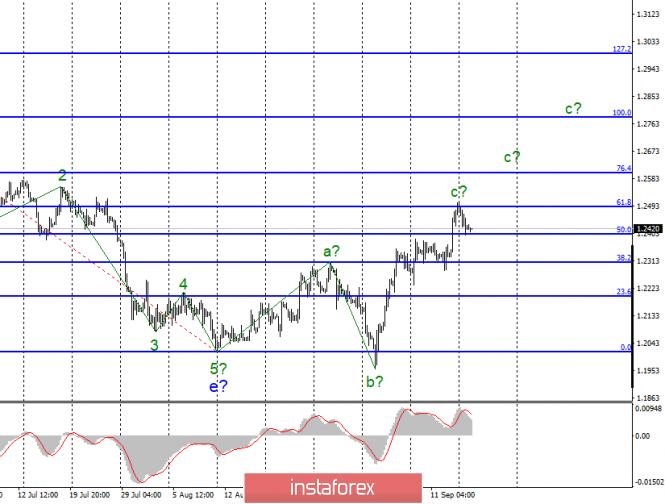 On September 16, the GBP / USD pair lost 70 basis points and made an unsuccessful attempt to break through the 61.8% Fibonacci level, which led to the quotes moving away from the highs reached. Thus, the proposed wave c can already be completed and it can get its development and take a more extended form. This is the case when everything will depend on the news background. In the near future, only two topics may affect the pound-dollar pair. The first, of course, is Brexit, news on which comes almost every day. The second is the Fed meeting and a possible rate cut. On the second topic, everything will become clear tomorrow. If the Fed, as markets expect, will lower the rate, then the dollar may fall even more, both against the euro and against the pound. On the first topic, everything will depend on the nature of the news.

On Tuesday, October 17, the GBP / USD pair began and continues to build a correctional wave, which may be internal in s, and the beginning of a new downward wave as part of a new bearish trend section. By and large, the prospects of the instrument remain entirely dependent on Brexit’s progress and on which direction this process is moving. The more the direction shifts towards the hard Brexit, the more chances there are for a new fall of the British currency, and the further away from the hard Brexit, the more chances there are for the instrument to grow. Unfortunately, the vector of Britain’s exit from the EU in recent days has again shifted towards tough Brexit, as Prime Minister Boris Johnson intends to ignore parliament and break the law, but to leave the EU on October 31 with or without a deal.

The downward trend section is still considered completed. Thus, now, it is expected to continue the construction of the rising wave with targets located near the calculated levels of 1.2489 and 1.2602, which corresponds to 61.8% and 76.4% of Fibonacci. Wave C may complete its construction in the near future. Thus, I recommend buying a pair in case of a successful attempt to break through the 61.8% Fibonacci level or after receiving a MACD “up” signal.

Source:: Analysis of EUR / USD and GBP / USD for September 17. Markets remain optimistic about the pound