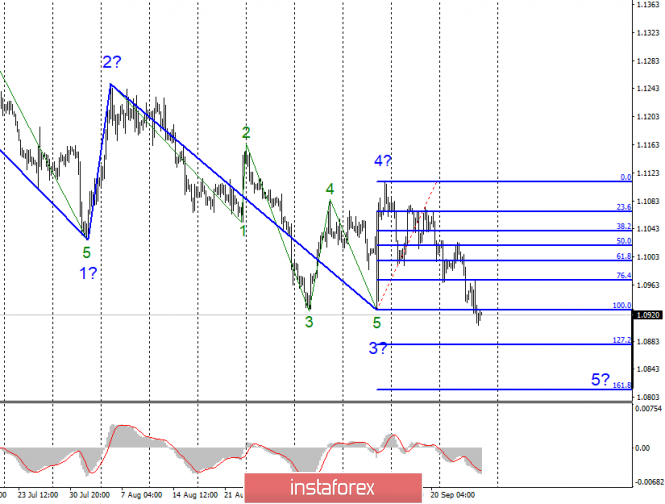 Thursday, September 26, ended for the pair EUR / USD with the loss of another 25 basis points. Thus, a successful attempt was made to break through the lows of waves 3 and 5 , in 3. The confirmation of the readiness of the Forex currency market to continue building a downward trend section, as well as the wave structure of which has acquired a 5-wave form has been received. If this assumption is correct, then the decline in quotations will continue in the direction of the level of 161.8% Fibonacci. Yesterday’s second quarter GDP report in America recorded an increase of 2.0%, which was exactly the same how markets expected to see, so there was no euphoria. However, the US dollar continued to increase, despite the fact that there were no other news and reports during the day. The “bearish” mood of the markets is visible to the naked eye.

News with a possible impeachment to Donald Trump is not too much interesting in the market. The markets are eagerly awaiting the economic reports that will come today from the United States. First of all, it is about changing the number of orders for durable goods.

Over the past year, just 4 months ended in the red, the last two showed an increase in orders. Thus, a recession may follow again in August, which is what most forecasts indicate. A reduction of 1.0% is expected. This indicator has several variations: indicators excluding transport, excluding defense orders, excluding defense and aviation. All of them are also important, and the market reaction will consist of reactions to each of the 4 reports.

The latest to come is the Michigan Consumer Confidence Index. In the last two months, as you can see, consumer confidence has declined, but still remains quite high. By the end of September, no significant changes in the index are expected.

The euro-dollar pair has transformed the entire wave markup. Now, I expect the pair to continue to decline with targets located near the calculated levels of 1.0876 and 1.0814, which equates to 127.2% and 161.8% Fibonacci. Wave 5, on the other hand, can turn out to be both very long and shortened. Thus, everything will depend on the news background. 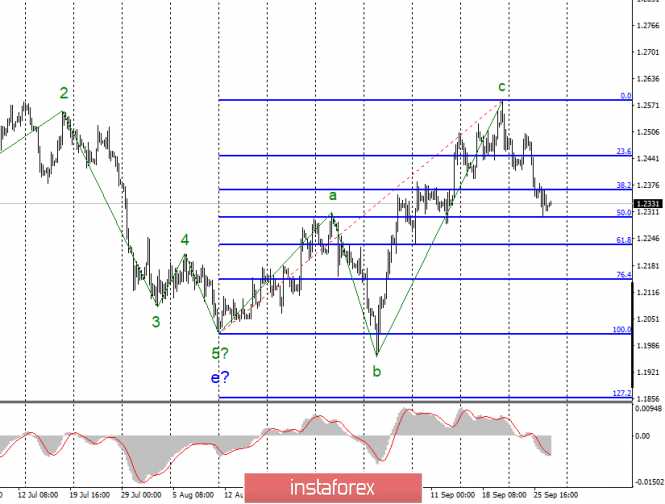 The pair GBP / USD on September 26 fell by another 25 basis points. Thus, the construction of the proposed first wave as part of a new downward trend continues. The UK news calendar in recent days is completely empty, and markets can only keep track of messages from the UK Parliament, which does not stop being the main source of news. But, unfortunately, even now, apart from debates and new furious calls by Boris Johnson to support Brexit until October 31 or early elections, no one is taking place. Meanwhile, debate over the possible resignation of Donald Trump continues in the US. An investigation into the pressure on Kiev has been launched because of Trump’s desire to investigate the activities of his main rival in the fight for the presidency in the upcoming elections of Joe Biden. Thus, in order for the impeachment process to officially start, the support of 218 votes of the House of Representatives is necessary, and it seems that the right number of votes is at the disposal of the Democrats. The dollar, however, does not really respond to this news.

Today, the UK economic news calendar is empty again. Although, until Great Britain officially leaves the European Union, markets will have an inexhaustible stream of news from the British and European governments, which speak with enviable regularity on Brexit. In addition, there is a huge stream of news from the British Parliament, which continues the confrontation between Boris Johnson and the opposition. Thus, it is these news that I recommend tracking.

The upward trend section supposedly completed its construction. Thus, now, I expect a decline in the instrument in the direction of the levels of 50.0% and 61.8% Fibonacci. The news background from the UK and economic reports from the USA continue to have the greatest impact on the dynamics of the euro-dollar instrument.

Source:: Analysis of EUR / USD and GBP / USD for September 27. The euro currency aimed at 1.08 and the pound is also ready to fall