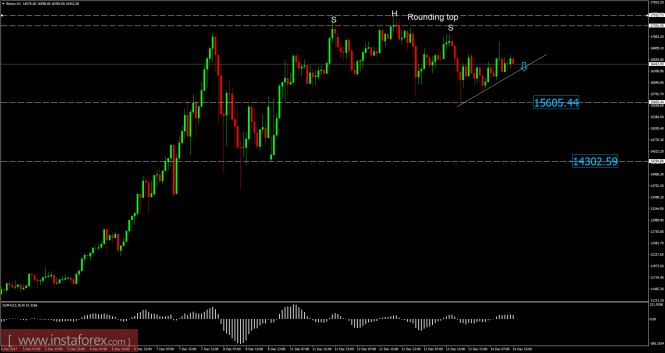 Bitcoin (BTC) has been trading sideways at the price of $16,450. Following her next-to-last Federal Open Market Committee (FOMC) meeting, outgoing Federal Reserve (Fed) Chairwoman Janet Yellen gave a final scheduled press conference 13 December 2017 in Washington, DC. In a growing sign of its influence, once again bitcoin was introduced as a topic for consideration at the highest levels of finance. No fewer than three times did cryptocurrencies make their way into the discussion: regulatory policy, prospects of a Fed Coin, and bitcoin’s threat to financial stability. Technical picture looks neutral.

According to the 1H time – frame, I found a head and shoulders formation in the background, whic isa sign that buying looks risky. I also found a rounding top in the background, which is another sign of weakness. My advice is to watch for potential selling opportunities. The downward targets are set at the price of $15,605 and at the price of $14,300.