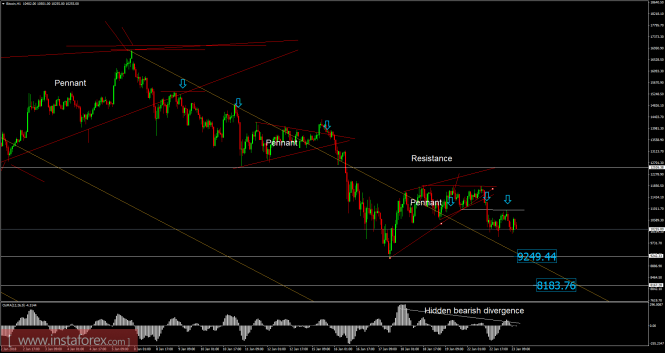 Bitcoin (BTC) has been trading downwards. As I expected, the price tested the level of $10.223. Hydro-Quebec, the largest state-owned utility in Canada, appears unable to meet the electricity demand from cryptocurrency miners seeking to establish operations in the energy-rich province. The announcement comes just weeks after the company sought to entice virtual currency miners as a means to bolster the province’s economic outlook, claiming that it had 5,000 megawatts of power to spare. The technical picture looks bearish.

According to the 1H time – frame, I found a broken bearish pennant pattern in the background, which is a sign that sellers are in control. I also found a hidden bearish divergence on the moving average oscillator, which is another sign of weakness. My advice is to watch for potential selling opportunities. The downward targets are set at the price of $9.249 and at the price of $8.183.