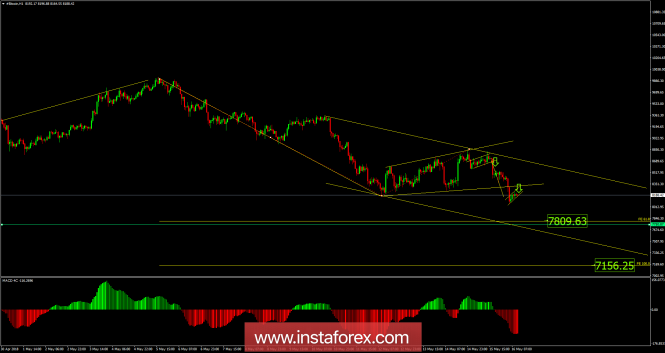 The Bitcoin (BTC) has been trading downwards. As I expected, the price tested the level of $8.239 and met my yesterday’s targets. Japanese internet giant GMO has updated its plans to manufacture and sell its 7nm bitcoin mining chips as well as for its own mining operations. Interested customers will soon be able to reserve some of these chips. The technical picture on Bitcoin looks neutral to bearish.

According to the H1 time – frame, I found that price broke consolidation zone in the background, which is a sign that sellers are in control. I also found a potential intraday bearish flag in creation, which is another sign of weakness. My advice is to watch for potential selling opportunities if you see a valid breakout of bearish flag. The downward targets are set at the price of $7.810 and at the price of $7.156.