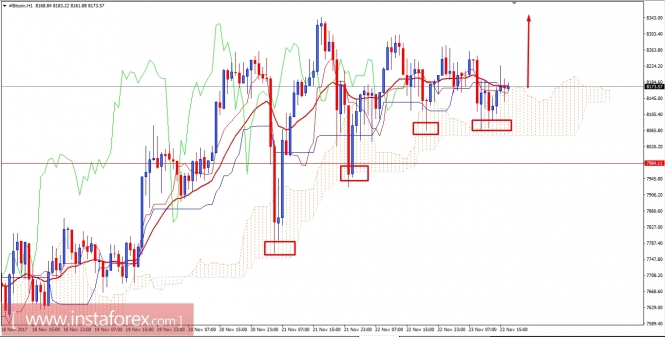 Bitcoin is still quite corrective and volatile above the $8,000 price level which is being supported by the dynamic levels of 20 EMA, Tenkan and Kijun line. As ECB President Draghi recently spoke about the cryptocurrency and did not reveal any threat. From his viewpoint, Bitcoin will not be affecting the European financial system which was quite positive for the digital currency market’s long-term growth prospects. Recently, due to hack of several Bitcoin wallets the gains of Bitcoin is currently quite stable above $8,000 but it is not making any significant progress towards the target price area of $9,000. As of the current scenario, price has been with the confluence of Kumo cloud as support whereas the higher lows are indicating that the bulls are still quite stable with the gains. Though there is certain consolidation recently, price is expected to proceed higher in the coming days. As the price remains above $7,500 – $8,000 price area, the bullish bias is expected to continue further.