The Bank of Japan maintained its aggressive monetary easing, as widely expected, and left its assessment of inflation and growth unchanged.

Governor Haruhiko Kuroda and his board members decided by an 8-1 majority vote to hold its target of raising the amount of outstanding JGB holdings at an annual pace of about JPY 80 trillion, the bank said in a statement on Tuesday.

The bank will purchase government bonds so that the yield of 10-year JGBs will remain at around zero percent.

The board also decided to hold the -0.1 percent interest rate on current accounts that financial institutions maintain at the bank.

The sole dissenting member Goushi Kataoka said the bank should take additional easing measures if there was a delay in achieving inflation target. He preferred a reduction in the target for 10-year yields.

Further, the bank said inflation expectations have been more or less unchanged instead of previous view that they were weakening. Nonetheless, risks to price outlook are skewed to the downside, BoJ noted.

Marcel Thieliant, an economist at Capital Economics, said the BoJ’s inflation outlook is too optimistic so renewed reductions in the Bank’s forecasts will be needed at forthcoming meetings.

The upshot is that the economist expects BoJ to leave both its policy rate as well as its 10-year yield target unchanged at least until the dust has settled from next year’s sales tax hike.

The Japan economy is forecast to continue its moderate expansion, the bank said. According to BoJ, the economy will continue growing at a pace above its potential, mainly through fiscal 2018. 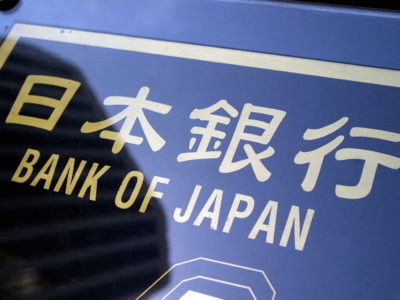 Why The Bank Of Japan’s Move To Negative Rates Signaled The Beginning Of The End (News: 17/02/15)