After the removal of the EURCHF floor, the SNB have intervened on multiple occasions by selling francs to drive the price of EURCHF higher and support Swiss exports. They have also repeatedly communicated that they intend to continue doing so and that EURCHF should be above Fr.1.10. Intervention is suspected when sudden short-term rallies occur in EURCHF without any news as a catalyst. Confirmation of intervention can be made only after the fact when the SNB disclose their monthly foreign exchange reserves; increases in foreign currency holdings indicate intervention during the month.

Interest rates of -0.75% and inflation falling further into negative territory have led the Swiss Franc to become one of the more bearish G10 currencies. Furthermore, due to Switzerland’s dependence on exports to other European countries, a primary concern for the SNB is its exchange rate with the Euro. A stronger Franc makes Swiss exports less competitive, which impedes Swiss companies and economic growth. For this reason in 2011 the SNB pegged the Franc against the Euro by holding EURCHF at €1.20, however in January 2015 the SNB surprised markets by removing the floor causing EURCHF to fall 3,500 pips in the initial aftermath. Just over a year since the event, EURCHF has retraced 70% of the initial spike as it now resides just below €1.10. The SNB still considers the franc to be overvalued versus the Euro and takes every opportunity to remind markets of this, along with their willingness to intervene if necessary.

On December 10, the SNB’s Q4 Monetary Policy Assessment saw no change in the -1.25% to -0.25% target corridor for 3-month CHF Libor. The deposit rate was also left unchanged at -0.75%. Heading into the release there was some speculation that the SNB would further cut rates, or add to their current program in response to recent ECB actions. However, while the ECB extended their current program, and cut the deposit rate by 10 basis points, the SNB stopped short of expanding their current asset purchase program. This less aggressive approach by the ECB allowed the SNB to hold policy steady, however further easing by the ECB this year may encourage the SNB to follow suit.

According to the consumer price index (CPI), inflation data for January saw prices fall -1.3% compared to a year ago and a further -0.4% compared from a month ago. With m/m readings heading further into deflation, EURCHF having stalled at €1.10 for almost 6 months, and the likelihood of further easing by the ECB, it may only be a matter of time until the SNB take additional measures to achieve their policy goals and objectives.

Third quarter GDP, released December 1, was stagnant at 0% (0.80% since a year prior), held back by weak performance in the energy, construction and financial sector. The same day saw Retail Sales for October y/y at -0.8%, below expectations. These two releases add to probability that the SNB may have to act to stimulate the economy.

5 Institutions Who Are Calling The Shots 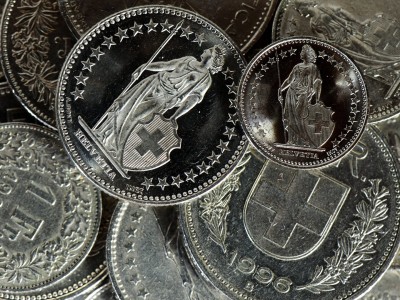 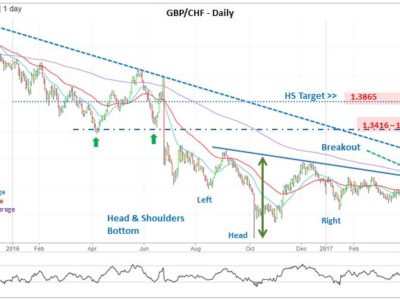 GBP/CHF: Short-term weakness should be followed by resumption of bull trend

Bullet Report | GBP tries to recover but lacks the momentum

Currency Update 23rd of May