AUD/USD Trading In The Red

AUD/USD dropped sharply and erased the yesterday’s gain, it could hit new lows till the end of the day if the dollar index will have enough energy to increase again. The currency pair had come back to retest a broken support level, so it could drop further in the upcoming period also because the USDX is expected to climb towards fresh new highs after the minor drop.

Technically, it should drop further on the short term after the breakdown below an important dynamic support, the today’s drop will confirm the breakdown. The Aussie drops as the Australian data have failed to impress today, the HIA New Home Sales dropped by 6.1%, while the Private Sector Credit increased only by 0.3%, less compared to the 0.5% estimate.

Remains to see what will bring the rest of the US data, some good figures will support the USD’s bullish movement. 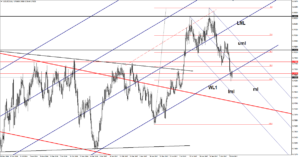 Price is trading in the red and drops quickly after the retest of the broken warning line (WL1) of the major ascending pitchfork. The false breakout above the WL1 will send the price much lower in the upcoming period. Technically, it is expected to drop further as long as is trading within the minor descending pitchfork. Only a failure to close below the 61.8% retracement level and below the 0.7624 previous low will signal a potential rebound. Technically, it should approach the lower median line (lml) of the minor descending pitchfork. 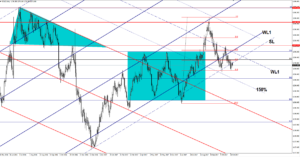 The price increased sharply today and resumed the upside movement and it was almost to reach the near term major resistance from the sliding line (SL). A breakout above the mentioned resistance will confirm a further increase in the upcoming period. Brent is strongly bullish on the short term, it should climb much higher after the breakout above the WL2 and after the 60.00 psychological level.