GBP/USD In The Red

The rate has dropped sharply and has resumed the yesterday’s bearish candle and is almost to reach a very strong confluence area. Price moves in range on the short term, but I hope that we’ll have a clear direction very soon and a great trading opportunity. The Cable plunged even if the Bank of England has decided to hike the interest rate from 0.25% to 0.50%. The Official Bank Rate was finally increased, the MPC members have voted by a majority of 7 to 2 for this decision, more versus the 6 to 3 estimate. The Asset Purchase Facility remained steady at 435B, matching expectations. The pair dropped also because the USD received support from the United States Unemployment Claims data, the indicator was reported at 229K jobs in the previous week, much below the 235K in the former week. 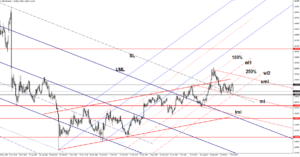 The rate has found resistance at the 250% Fibonacci line and failed to stay above the 1.3268 static resistance. Right now is almost to reach the major confluence formed between the second warning line (wl2) with the sliding line (SL) and with the median line (ml) of the minor descending pitchfork. We’ll see how will react when will hit this level, a valid breakdown will accelerate the sell-off, this is the most anticipated scenario. 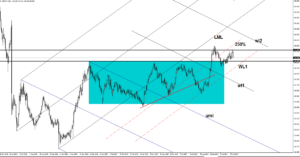 The GBP/JPY plunged and could retest the 148.46 level very soon after the false breakout above the 151.66 and after the failure to close near this level.  Price dropped even if the BOE has finally decided to hike the interest rate. The perspective remains bullish as long as the rate is trading above the first warning line (WL1) of the ascending pitchfork.

A larger drop will be confirmed only after a breakdown below the WL1, personally I believe that will take out this if will reach it. 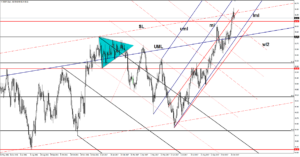 Brent dropped today and resumed the yesterday’s bearish candle. Price has shown the first exhaustion signs after the false breakout above the outside sliding line (SL) and above the upside line of the ascending channel. A retest of the mentioned resistance levels will signal a potential drop towards the lower median line (lml) of the minor blue ascending pitchfork. Has failed once again to approach and reach the median line (ml) of the ascending pitchfork, signaling that we may have a larger corrective phase.