EUR and GBP: the euro and pound will find it difficult to continue growth against the US dollar

The British pound managed to keep its position in pair with the US dollar, even though the data released on the weak PMI for the services sector in the UK indicated a decrease in GDP in March of this year.

According to the IHS Markit report and a survey of purchasing managers, the index of activity in the UK services sector fell to 48.9 points in March, falling below the level of 50 points, indicating its decline. The decrease in activity in the services sector was recorded for the first time since July 2016. Economists had expected the rate to fall to 50.8 points in March.

As noted in Markit, a sharp decline in activity will necessarily affect the country’s GDP in March, which only confirms the stagnation of the economy in the 1st quarter of this year.

However, the British pound did not show a serious fall after this report, as traders are full of optimism in the process of negotiations on Brexit. Let me remind you that the British Prime Minister Theresa May announced a meeting with the leader of the opposition Labor Party Jeremy Corbyn, who will launch the process of developing a Brexit compromise plan. Against this background, May asked for a longer delay from the EU as soon as the UK leaves the country.

As for the technical picture of the GBPUSD pair, in order to maintain the upward correction of the pound, a break of resistance of 1.3190 is required, above which the bulls did not manage to get out yesterday. Only a confident consolidation at 1.3190 will lead the trading instrument to the test of local highs around 1.3265 and 1.3320. In the scenario of the pound decline, the support will be provided by the lower border of the side channel of 1.3115 and a larger level of 1.3070.

The European currency remained to be traded in a narrow side channel in pair with the US dollar after the release of weak statistics for the US, which signaled a slight slowdown in the growth of the labor market.

According to Automatic Data Processing Inc. and Moody’s Analytics, the number of jobs in the US private sector in March this year increased by only 129,000, after rising by 197,000 in February. Economists had expected private sector growth of 173,000.

Moody’s Analytics noted that the US labor market is gradually weakening, and the growth in the number of jobs slows down noticeably in all sectors and companies. Let me remind you that tomorrow, there will be a more important report from the US Department of Labor on the number of jobs outside agriculture. Economists expect 175,000 jobs to be created outside of agriculture in March.

According to the data, PMI’s purchasing managers’ index for the non-manufacturing sector of the USA fell to 56.1 points in March from 59.7 points in February, while economists expected the index to drop to 58 points. Values above 50 indicate an increase in activity.

Source:: EUR and GBP: the euro and pound will find it difficult to continue growth against the US dollar 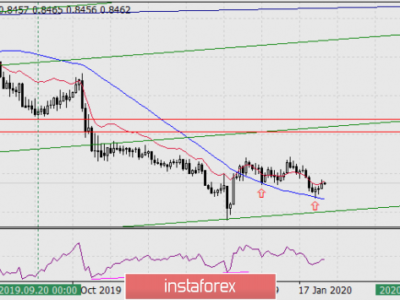 Forecast for the EUR/GBP cross rate for February