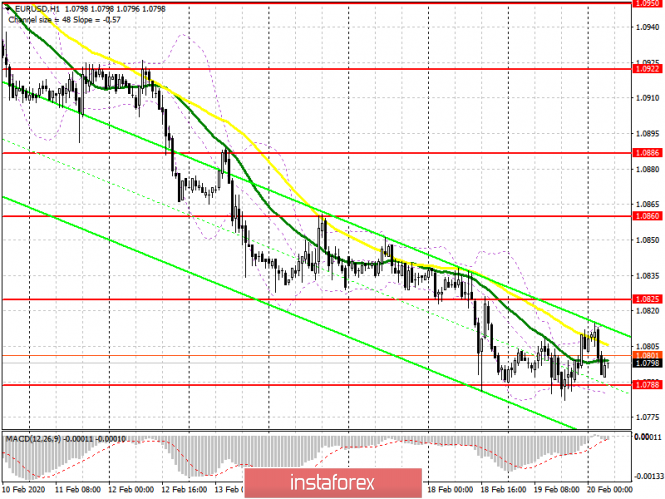 The euro slightly recovered after the publication of the Federal Reserve minutes, in which traders did not see anything new, except for the risk of coronavirus affecting the global economy, and forecasts of stable US economic growth. There was no talk about interest rates. At the moment, the bulls are focused on support in the 1.0788 area, the update of which yesterday led to the formation of divergence on the MACD indicator, which allowed buyers to maintain their positions. However, no one is willing to open long new positions, which is supported by selling the euro at the Asian session. In the scenario of breaking the 1.0788 range, it is best to open long positions in euros after updating the lows of 1.0765 and 1.0740, however, with the current bear market,one must be careful with searching for the low. A more correct decision for buyers of the euro will be the return of EUR/USD to the resistance of 1.0825, from which a good upward correction will be formed in the region of the highs of 1.0860 and 1.0886, where I recommend taking profits.

Bears continue to bend their line, and weak fundamental data on the state of the European economy help them in this. Sellers have already updated the low of the year this morning, but failed to gain a foothold on it. Today there are regular reports on the state of the German economy, which is balancing on the verge of a recession, creating more and more pessimistic investors. A break of support of 1.0788 will bring EUR/USD to the area of new annual lows 1.0765 and 1.0740, where I recommend taking profits. However, be careful with selling the euro at current lows, especially on a breakout, since a bullish correction may be formed at any time. In case the pair grows in the morning, only the formation of a false breakout in the 1.0825 area will be a signal to open short positions in euros. I recommend selling immediately on the rebound only after a test of a high of 1.0860.

Trading is carried out in the region of 30 and 50 moving average, which indicates another attempt by euro buyers to form an upward correction.

A break of the lower boundary of the indicator at 1.0788 will lead to a new fall in the euro.

Source:: EUR/USD: plan for the European session on February 20. Fed minutes refer to coronavirus and good state of US economy. Bears 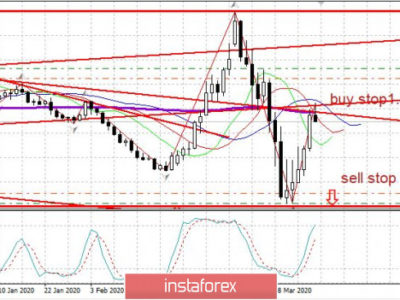