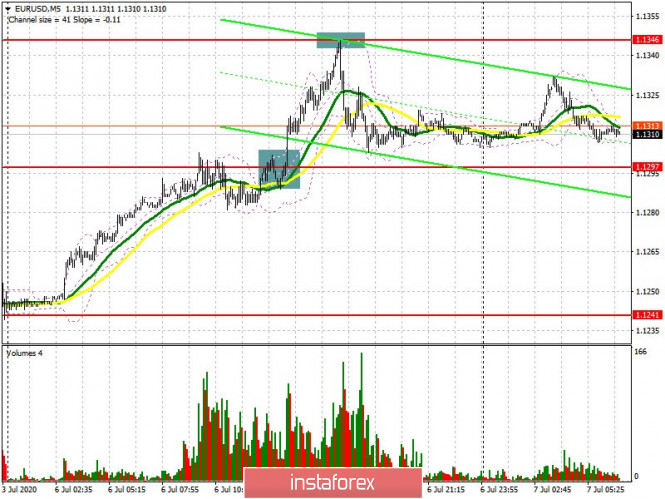 Yesterday’s data on activity in the US non-manufacturing sector once again convinced buyers of the European currency to make the right choice. And although the breakout of the 1.1297 resistance did not lead to forming a clear signal to buy the euro, it was still possible to make great money on its sales. If you look at the 5-minute chart, you will see how the bulls have already tested the resistance of 1.1297 several times in the afternoon, and there was a breakout at the next attempt, which resumed the bullish momentum formed in the Asian session. Buyers were aiming for a high of 1.1346, from which I advised opening short positions immediately on the rebound, which happened. The Commitment of Traders (COT) reports for June 30 recorded an increase in short positions and a sharp reduction in long ones. This indicates that market participants took a more cautious approach to the euro last week, which is confirmed by the side channel in which the pair has been in all week. Those who want to buy the euro in current conditions and at higher prices become much less, and more and more people want to have time to enter the market before the wave of a new fall in EUR/USD, as a small surge in activity in the summer period will quickly subside before a new wave of coronavirus spread. The report shows an increase in short non-commercial positions from the level of 72,368 to the level of 81,432, while long non-commercial positions decreased from the level of 190,816 to the level of 180,387. As a result, the positive non-commercial net position decreased to 98,955, against 118,448, which indicates a slowdown in the growth of interest in purchasing risky assets at current prices. As for the intraday strategy, euro buyers will be focused on protecting the 1.1290 support today, which was taken from sellers yesterday. Forming a false breakout on it in the first half of the day will be a signal to open long positions while expecting a return and a resistance test of 1.1346, the breakout of which will be a secondary task. Consolidating above this level will lead EUR/USD to new local highs in the area of 1.1381 and 1.1418, where I recommend taking profits. If buyers are not active at the level of 1.1290, as it was yesterday in the morning for the sellers, it is best to abandon long positions before updating a larger low of 1.1247 and open a long position immediately on the rebound, counting on a correction of 30-35 points within the day.

Sellers of the euro will wait for weak reports on industrial production in Germany and retail sales in Italy, although the June figures could please the market. Therefore, a consolidation below the support of 1.1290 closer to the second half of the day will be a signal to open short positions in the euro in the hope of pulling down and updating the larger low of 1.1247, where I recommend taking profits. The long-term goal will be the 1.1193 area. The bears will also need to cope with the moving averages that pass below the 1.1290 support. If the demand for EUR/USD persists in the first half of the day, it is best to abandon sales before forming a false breakout in the area of resistance at 1.1346, or open short positions immediately on the rebound from the larger resistance of 1.1381, counting on a downward correction by the end of the day of 20-25 points. 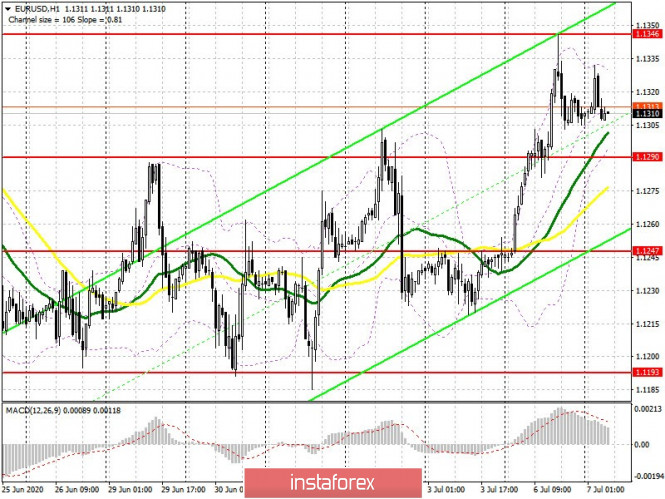 Trading is conducted above 30 and 50 moving averages, which indicates active attempts by bulls to continue the growth of the European currency.