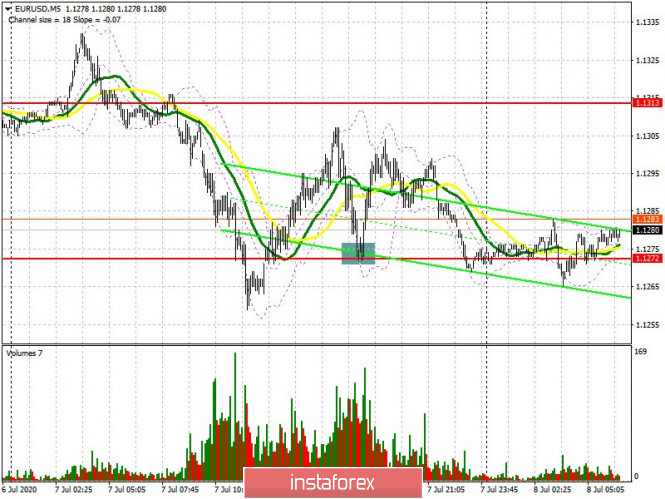 Buyers of the euro made another attempt to keep the upward trend on their side and were active at 1.1272 yesterday, from which I advised you to open long positions in my forecast for the afternoon. If you look at the 5-minute chart, you will see how the next fall to the level of 1.1272, after the bulls’ unsuccessful attempt to go above the resistance of 1.1313, led to an upward movement of EUR/USD, but it was not possible to achieve support from major players, as a result, the pair returned to the area of 1.1272 in the Asian session. At the moment, the bulls should protect the support of 1.1267, since its breakout will lead to a reversal of the upward trend that was formed on July 1. I advise opening long positions from this range only after a false breakout has been formed. Given the fact that important data is not published today, it is likely that the euro will continue to remain under pressure against the background of yesterday’s reports on Germany and the forecasts of the European Commission. When the support breaks 1.1267, it is best to wait for an update of the new low of 1.1233 and open long positions from it immediately for a rebound, counting on a correction of 20-25 points within the day. Larger bulls will prefer to wait until the 1.1233 area has been updated. Let me remind you that the Commitment of Traders (COT) reports for June 30 recorded an increase in short positions and a sharp reduction in long ones. This indicates that market participants are taking a more cautious approach to the euro last week, as well as the lack of people willing to buy the euro when it grows at higher prices. The report shows an increase in short non-commercial positions from the level of 72,368 to the level of 81,432, while long non-commercial positions decreased from the level of 190,816 to the level of 180,387. As a result, the positive non-commercial net position decreased to 98,955, against 118,448, which indicates a slowdown in the growth of interest in purchasing risky assets at current prices.

To open short positions on EUR/USD you need:

The task of sellers of the European currency is to break through and consolidate below the support of 1.1267, which the bulls are so actively protecting. A break of this level will lead to forming a new downtrend, which can bring the European currency to a low of 1.1233, and also lead to an update of the support of 1.1193, where I recommend taking profits. The gloomy forecasts of the European Commission, which could be found yesterday, quickly discouraged euro buyers from being active at weekly highs. Another good point for entering short positions is when a false breakout forms in the resistance area of 1.1305. I recommend selling EUR/USD immediately for a rebound after updating the weekly high in the area of 1.1345, counting on a correction of 20-25 points within the day. 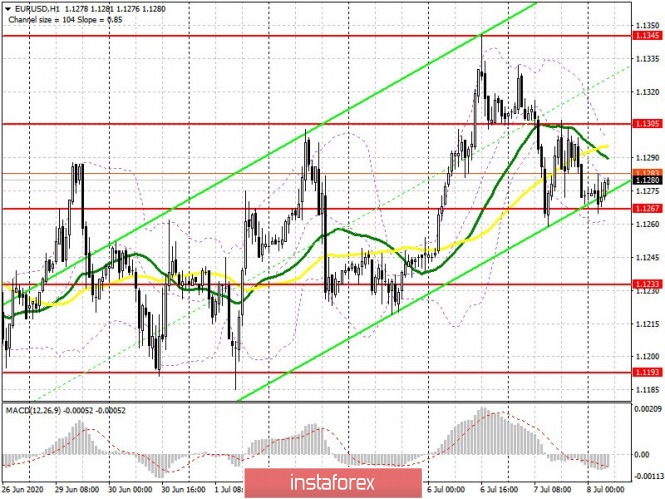 Trading is conducted below 30 and 50 moving averages, which creates a number of problems for buyers of the European currency.

A break in the lower border of the indicator around 1.1260 will lead to increased pressure on the European currency. Bullish momentum will be limited by the upper level of the indicator in the area of 1.1300.