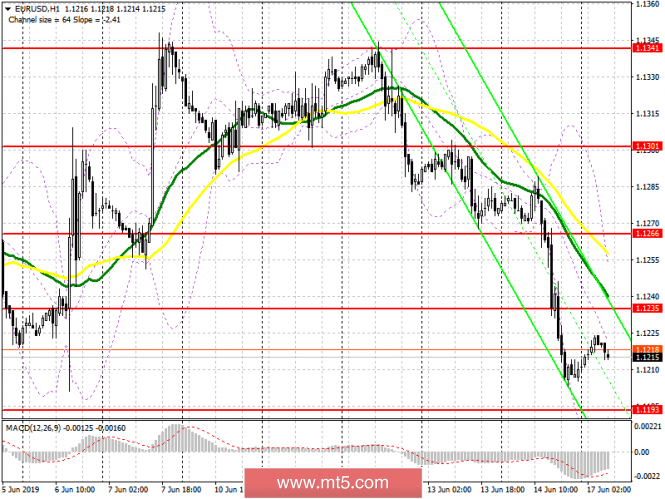 The euro fell on Friday after a good report on US retail sales, and today, buyers can only count on a divergence, which is gradually being formed on the MACD indicator. Yesterday’s update of the low with the support test of 1.1193 will be the first signal to open long positions in EUR/USD with the main task of returning and consolidating above the resistance of 1.1235, which temporarily stops the current downward trend. With the breakthrough scenario of 1.1193 and the lack of demand for the euro, it is best to look at long positions after updating major support at 1.1163.

Under the euro growth scenario in the first half of the day, the formation of a false breakdown in the resistance area of 1.1235 will be a signal to open short positions in the euro, but the main goal of the bears will be a low of 1.1293, consolidating below which will push EUR/USD to the support area of 1.1163 and 1.1138, where I recommend taking profit. The only problem for euro sellers is divergence, which is currently being formed on the MACD indicator and can limit the downward potential in the first half of the day. If the bulls manage to push the pair above 1.1235, it is possible to open short positions on a rebound from a high of 1.1266.

Trade is conducted below 30 and 50 moving averages, which indicates a further decline of EUR/USD.

If the euro declines, support will be provided by the lower limit of the indicator in the 1.1193 area, while growth will be limited to the upper limit in the 1.1240 area.

Source:: EUR/USD: plan for the European session on June 17. The euro fell, but divergence on the MACD may leave a decline

Bitcoin: The institutional investors demand for bitcoin is growing