Yesterday’s indistinct attempt by the bears to continue the downward correction in the euro led to an update of the lows of the week and, in general, to maintain the trend to strengthen the US dollar. But there were problems in regards to the entry points. If you look at the 5-minute chart in the afternoon and remember the support level of 1.1215, which I paid attention to, you can see how the bears are trying to gain a foothold below this area, but they manage to do this only on the second attempt, which leads to the next wave of euro decline. Many traders are in no hurry to sell further, since the EU summit will take place today, at which it will be possible for them to discuss a package of assistance worth 750 billion euros, which many have already forgotten about. However, serious decisions on this issue are unlikely to be taken, which will lead to a slight upward correction in the pair by the end of the week. Bulls need to gain a foothold above resistance 1.1230, which will be a signal to buy and open a direct road to the resistance area of 1.1290, where I recommend taking profits. In case the euro falls further, it is best to return to long positions after updating the next support of 1.1164 immediately for a rebound, counting on a correction of 30-40 points within the day. It is worth remembering that the market is on the side of euro buyers. An increase in ling positions was recorded in the Commitment of Traders (COT) reports for June 9, as well as the reduction of short ones, which indicates a bullish momentum for the pair. The report shows a reduction in short non-profit positions from 93,172 to 98,020, while long non-profit positions sharply rose from 174,412 to 184,669. As a result, the positive non-profit net position rose again to 95,639, against 81,240, which indicates an increase in interest in purchases of risky assets.

Bears, albeit with great difficulty, achieve their goal day after day and update weekly lows, keeping the pair in a downward channel. Today, the main task will be to form a false breakout in the resistance area of 1.1230, which will be a signal to open short positions, which will lead to updating the next lows in the area of 1.1164. Bears will further aim for the area 1.1106, where I recommend taking profits, but this will only happen if there are real prospects for the approval of the assistance plan worth 750 billion euros at the EU summit. If the bulls turn out to be stronger and take the resistance of 1.1230 in the first half of the day, and most likely it will be so, it is best to postpone short positions in the pair until the test of a high of 1.1290 is calculated based on a rebound of 30-40 points within the day. 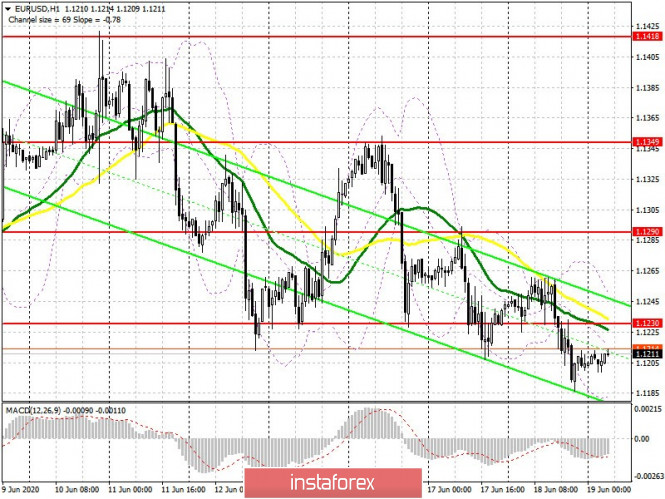 Trade is conducted below 30 and 50 moving averages, which indicates a further decline in the euro.

The euro decline may be limited by the lower border of the indicator in the region of 1.1180. A break of the upper border in the area of 1.1240 will strengthen the demand for the euro.

Source:: EUR/USD: plan for the European session on June 19 (analysis of yesterday’s deals). Pressure on the euro may decline, bulls