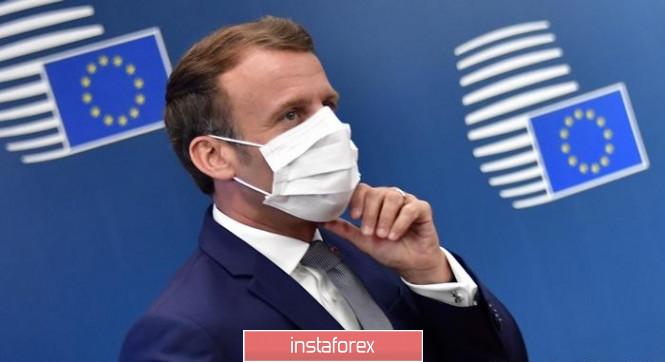 The outcome, or lack thereof, of the recent EU summit has left risky assets in a sideways channel. It was extended for Sunday and is likely to continue today, but there still has no consensus on the main issues. If the decisions lead to a negative outcome, the euro, the pound and other currencies may sink against the US dollar.

At the summit last Friday, European Council president Charles Michel put forward a compromise solution and proposed to issue grants of € 450 billion instead of € 500 billion. However, Nordic countries such as Poland and the Netherlands opposed it and said that they could block this proposal if the current conditions find support from most countries. The program was initially worth € 750 billion, but Nordic countries opposed it, as they will have to finance the southern countries, which are most affected by the coronavirus crisis, at their own expense. In addition, Michel proposed to make discounts on contributions to the EU budget for Germany, Austria, Denmark, Sweden and the Netherlands, which will enable these countries to save in the future. Another stumbling block was the adoption of the EU’s seven-year budget plan for 2021-2027 that has a total volume of € 1.074 trillion, which also has a number of restrictions that prevent countries from reaching a consensus.

Meanwhile in the United States, the Federal Reserve announced last Friday its plans to extend the emergency lending program to non-profit organizations. The provision of new loans is planned within the framework of the lending program for small and medium-sized businesses, which has been launched since the outbreak of the coronavirus. Proposals to provide support to non-profit organizations such as schools, hospitals and social companies have repeatedly been raised before, the amount of which is about $ 600 billion. In addition, a number of financial conditions for obtaining loans were also softened, which will allow more non-profit organizations to benefit on assistance.

The US Treasury Secretary Steven Mnuchin also made a speech, during which he noted that the Congress should consider writing off all small PPP loans as well as extend the emergency assistance program to allow the badly affected businesses to take out additional loans to support their business activities. According to him, it is necessary to restructure the credit lines that were used to pay salaries and other expenses allowed in the terms of the program as part of assistance to ease the effects of the coronavirus, and the proposal to completely write off and turn loans of less than $ 150,000 into grants would save many companies from filing additional applications for loan write-offs and ease the burden on commercial activities.

As for macroeconomic reports, the latest data on consumer sentiment in the United States came out weak, which disappointed many traders. The fall in the index was due to the recent surge on coronavirus cases in the country, as well as the complication in the labor market. According to data published by the University of Michigan, the preliminary consumer sentiment index fell from 78.1 points in June to 73.2 points in July, while economists had expected it to be 77.8 points. However, many are of the opinion that the decline is not surprising, since consumers need a little more time to reassess the possible impact of the coronavirus.

With regards to the US labor market, the new wave of coronavirus infections in the country creates additional problems for companies and employers who are very selective about the issue of retaining jobs. Such is another reason for consumers to think about their costs, which certainly affects the economic recovery after the pandemic. With infections on the rise in many states, recovery in a variety of industries is becoming slower, in which experts believe that the second wave of the pandemic will cause the same economic problems in the southern and western regions.

Meanwhile, the pace of construction in the United States has increased in June due to an increase in demand, which will surely support the industry after its sharp decline during the coronavirus pandemic. According to the report of the US Department of Commerce, construction of new homes rose by 17.3% in June, amounting to 1.186 million units per year, while building permits increased by 2.1%, and mounted to 1.241 million units per year. These data suggest that in the future, demand for housing will rise in the United States, and it will continue to stimulate activity in the construction sector. However, problems could return if new outbreaks of Covid-19 across the country once again lead to worsening social distancing measures at businesses and construction organizations.

As for Europe, the data on inflation, which was released on Friday, was ignored by the market since the report fully coincided with the forecast of economists. According to the data, the CPI in the eurozone increased by 0.3% in June, and by 0.3% per annum, which is very far from the 2.0% figure that the European Central Bank is counting on. Meanwhile, core inflation turned out to be slightly better, but even here we cannot speak of any significant discrepancies with forecasts. According to the data, the core consumer price index, which does not take into account volatile categories and energy carriers, rose by 0.3% in June and by 0.8% per annum, while the CPI excluding tobacco products upped by only 0.1% per annum. The weak economic growth observed after the coronavirus pandemic neutralizes zero interest rates, which do not lead to a sharp increase in inflation, as is the case in normal economic cycles.

With regards to the technical picture of the EUR/USD pair, only a breakout from the resistance level of 1.1455 will increase the demand for risky assets, which will open a direct way to the highs of 1.1510 and 1.1570. However, to fully support the bulls, good macroeconomic statistics or new decisions are required on the part of the EU leaders to support the economy. If in the near future the euro does not manage to get out of the range mentioned above, a downward correction could occur, which may increase after a breakout from the support level 1.1410, and such will quickly push the quote to the lows of 1.1310 and 1.1255.

Source:: EUR/USD: The recent EU Summit has failed, but the bulls still believe in a bright future for the eurozone. Meanwhile, the