The emotional reaction to the events of yesterday is gradually subsiding: dollar bulls are trying to return the US currency to its previous positions, using any reason for this. Even today’s trump demarche in the negotiations on the shutdown had no positive influence on the greenback – the dollar index moved away from months of lows, although it remained within 94 points. But the main intrigue now is whether the dollar will continue to weaken further – or are we still dealing with temporary difficulties of growth?

In my opinion, the decline of the US currency has quite deep reasons, and the current situation is different from many similar ones that took place last year. In recent years, the dollar has had an undeniable trump card in the form of tightening the Fed’s monetary policy. Against the background of the other central banks of the leading countries of the world (with the exception, perhaps, of the Bank of Canada),the Fed favored its consistent steps to normalize monetary policy. The greenback enjoyed a reasonable advantage and, accordingly, demand. For example, the dollar index met 2018 at 88 points, and “spent” it at 97.4. The same can be said about the euro/dollar pair – the rate fell from 1.24 to 1.12 for the year. If greenback and experienced periods of weakening, it is only temporarily, more than making up for lost ground.

But now the situation is changing dramatically: the Federal Reserve is clearly slowing down, and in the near future may put on pause the process of tightening monetary policy. While the rest of the central banks by this time will only come to the starting point: in particular, the ECB can raise the interest rate at the end of this year (thus beginning the process of normalizing monetary policy), the Reserve Bank of Australia is expected to start raising rates in the first quarter of 2020, as the Reserve Bank of New Zealand. The Bank of Canada has raised the rate five times since the summer of 2017, and this year will likely continue this process (the members of the regulator intend to raise the rate to a neutral level, that is, to the range of 3%-3.5%). The Bank of England, in turn, is burdened only by the issue of Brexit – according to many analysts, if the “divorce process” is completed in a civilized way, the English regulator may double the rate over the next year.

In other words, the dollar will lose its “competitive advantage” in this context – even if the Fed follows the scenario that was previously announced. However, there are certain doubts. I do not mean the loud statement of the head of the Federal Reserve Bank of Atlanta, Raphael Bostic, that the regulator can reduce the interest rate. Still, the probability of such a step is quite small, if not minimal. The most that dollar bulls should fear is a long pause in the process of tightening monetary policy. These concerns are also correlated with another factor: the fact that the members of the regulator have not yet decided on the level of the neutral rate. Let me remind you that the neutral level range is quite wide, from 2.5% to 3.5%.

For a long time, members of the regulator voiced quite “hawkish” intentions – in their opinion, the level of the neutral rate is “slightly above three percent”, that is, at around 3.25%. However, recent trends suggest that the regulator may be satisfied with the lower limit of the above range. This, in turn, means that in 2019 there may be either another rate increase, or the Fed will suspend this process altogether. Here it is worth noting that the supporter of the latter option is James Bullard, who in January gained the right to vote in the Federal Reserve. Since the summer of last year, he voiced this position, and just yesterday repeated the thesis that “the rates are already at an acceptable level.” If his position is supported by other members of the regulator, the worst fears of dollar bulls can be realized.

By the way, the minutes of the December Fed meeting published yesterday fully confirmed the “dovish” attitude: according to the members of the regulator, in 2019 they can show “patience” in the matter of further rate hikes. In addition, the December increase was not supported by all Fed members (though the minutes did not specify their names). Later this position was confirmed by Jerome Powell during his public speeches.

Of course, much will depend on the dynamics of key macroeconomic indicators. Therefore, tomorrow’s release on the growth of US inflation is of great importance, in the context of the nearest prospects of the EUR/USD pair in particular, and the dollar as a whole. According to the general forecast, the consumer price index on a monthly basis will decrease to -0.1%, and in the annual – to 1.9%. If this forecast is justified, then the above fears will only increase, and the US dollar will again be under sufficiently strong pressure. 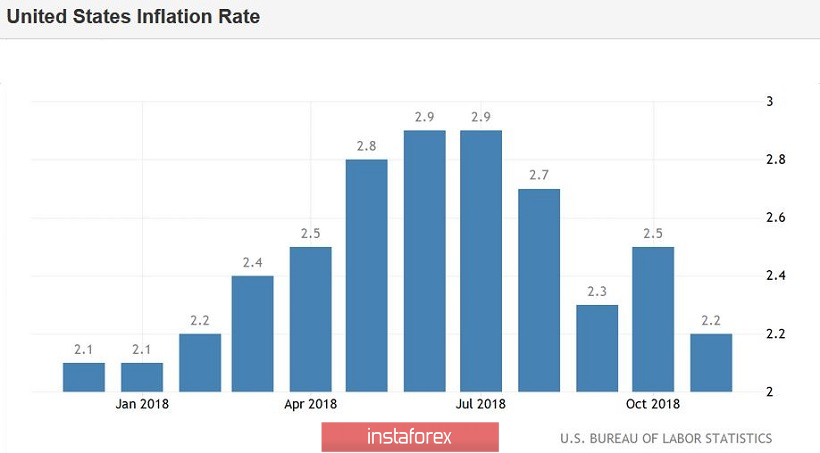 In the context of the euro/dollar pair, bulls need to keep the price above 1.1515 – that is, above the upper line of the Bollinger Bands indicator and all lines of the Ichimoku Kinko Hyo indicator. In this case, and the momentum may continue up to the boundary 16 of figure. The nearest support level is 1.1505-the upper limit of the Kumo cloud.

Source:: The Fed minutes confirmed the “dovish” intentions of the regulator