The results of yesterday’s Federal Reserve meeting were expected by the market: the central bank raised the rate by a quarter point and announced two rate hikes next year instead of three, as previously expected. Jerome Powell fulfilled his task – he described in optimistic tones the results of the development of the American economy for the current year against the background of the general slowdown of the world economy. But at the end of the day the dollar was still in the red (-0.02%) – the euro showed an increase of 16 points, which, as a result, this morning practically returned the technical situation to the state it was in yesterday morning. At H4, it can be seen how the price drop after the rate increase found support on the balance line. On the daily chart, the signal line of the Marlin oscillator touches the upper boundary of the wedge, and the question of reversal of the indicator lines and with them the price down remains unsolved, just like on Wednesday. The trading volume for the euro was high. Perhaps investors are still pushing speculative buying, which leads the trend of movement down without preliminary growth. 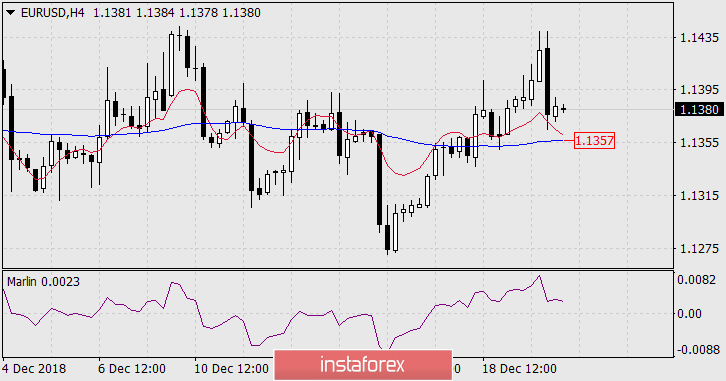