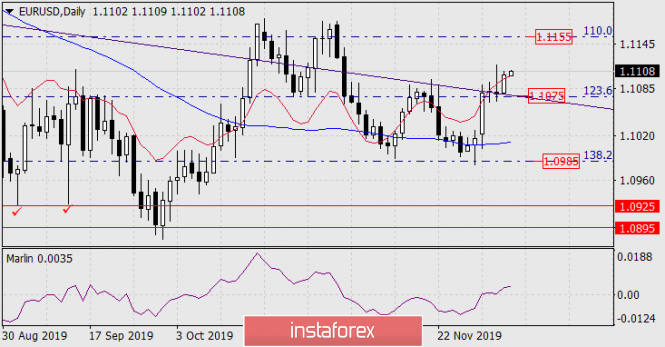 The euro grew by 25 points on Thursday, probably on the potential set on Wednesday by weak US data on ISM Non-Manufacturing PMI and employment from ADP in the private sector. But yesterday there was already good data: the US trade balance in October improved from -51.1 billion dollars to -47.2 billion, the volume of factory orders in the same month increased by the expected 0.3%. But most importantly, the Ministry of Labor weekly report on the number of applications for unemployment benefits showed 203 thousand applications against a forecast of 215 thousand, which can speak of fairly good data on today’s Non-Farm Employment Change – new jobs in the non-agricultural sector. The forecast for the indicator is 181 thousand, it will likely turn out to be no worse. The University of Michigan consumer confidence index is expected to rise from 96.8 to 97.0; consumer lending in October could show growth from $9.5 billion to $16.0 billion.

On the technical side, a positive economic performance may mean that the 1.1155 target may not be achieved, the price exit with consolidation above the price channel line on the daily chart could turn out to be false, especially in the context of yesterday’s positive data. 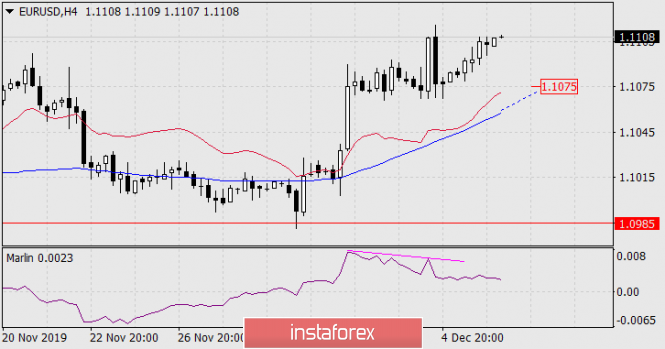 On the four-hour chart, the divergence on the Marlin Oscillator remains relevant, the signal line continues to decline against rising prices, today the euro can fall. We do not expect a strong price movement – there is strong support from below: on the daily scale, the point of intersection of the price channel line with the Fibonacci level is 123.6% at the price of 1.1075, the MACD line is approximately in the same area at the four-hour chart.