LATEST ARTICLES
What Are The Main Drivers For Gold?
UK Confirms Recession. Who’s Next?
EIA Reports 3rd Consecutive Inventories Fall
What You Need To Know: NZ & Mexico Rate Decisions
Risk ON As Sentiment Shifts
Gold Retreats From All-Time Highs
WTI Crude Oil Falls Back Into Consolidation
GBPUSD Likely To Settle Inside The Range
Euro Continues To Extend Declines
The Week Ahead: Technology Supremacy

On Thursday, the dollar strengthened, adding 0.2% to the index, which was facilitated by good data on the growth of factory orders – the March figure grew by 1.9% against expectations of 1.0%. The euro lost 22 points, eventually gaining support from the four-hour balance line. The Marlin oscillator on H4 indicates a further decrease in the trend.

Today, the main news will be data on employment in the United States. The increase in jobs outside the agricultural sector in April is expected to be 181 thousand, the average hourly wage may grow by 0.3%, business activity in the non-production sector from ISM is expected to be 57.2 against 56.1 a month earlier.

But in the afternoon, the European CPI is set to be released, and here the forecasts are also optimistic; The base CPI for April is expected to be 1.0% y/y against 0.8% in March, the overall CPI is 1.6% against 1.4% earlier.

The minimum task for the euro today is to consolidate below the level of 1.1155, with fresh forces next week to continue the decline to 1.1075 and 1.0985. The target levels are determined by the Fibonacci grid of the daily chart. 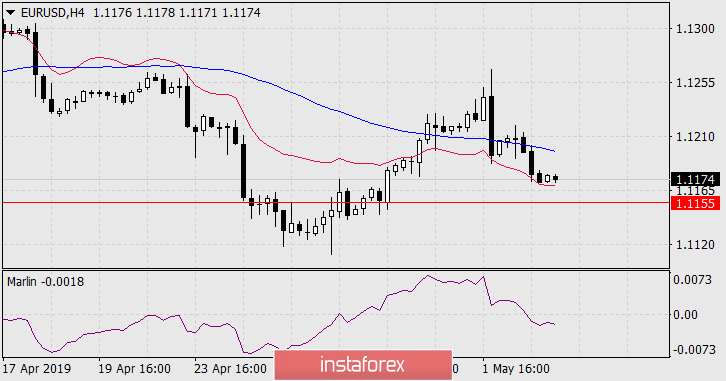 What Are The Main Drivers For Gold?

What You Need To Know: NZ & Mexico Rate Decisions

Risk ON As Sentiment Shifts

GBPUSD Likely To Settle Inside The Range