For most of 2017, a majority of the market’s attention was focused on the US Dollar.  Pro-growth agenda policies from newly elected President Donald Trump and the somewhat uncertain interest rate timeline from the Federal Reserve have acted in tandem to keep forex traders interested in what is likely to happen next in greenback valuations.

But this could all change as we head into the new year.  Many of the political agenda pieces in the US have already been introduced to Congress and it can now be argued that the major moves have already been seen in the currency.  This could place trader focus onto other regions of the world, and one of the nation that we will be watching in our own positioning stances in the country of Singapore. 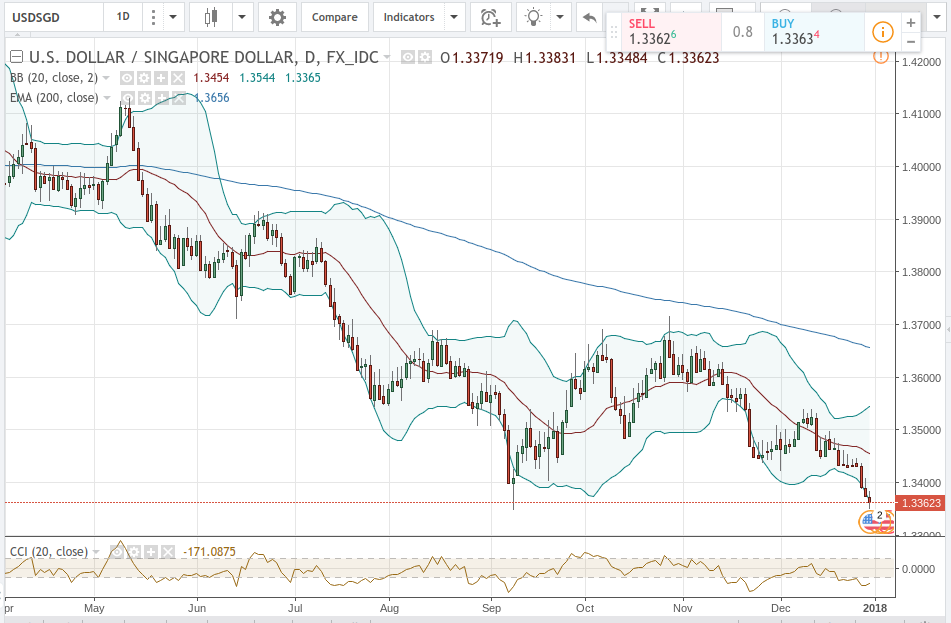 Relative to the US Dollar, the Singapore Dollar has shown consistent strength in its uptrend.  After breaking key support levels against a number of different currencies, the US Dollar has broken to new lows in it exchange traded funds (which track the currency against a number of different global currency assets).  The weakness has been propelled by dovish interest rate policy but it is unlikely that the market will be revising its stance on these outlook areas any time soon.

The reverse is true in the region of Singapore, however, as the central bank is on a much more clearly defined tightening cycle that could prop currency values over the next few quarters. This is already indicated in the price charts themselves, which show a strong downtrending activity trading cfds over the last year.

Forex traders might continue to consider selling the USD/SGD currency pair as long as the pro-growth measures in the US underscore the need for lower interest rates in the global economy.  We can see that Singapore is one of the areas that is less likely to be impacted by these fiscal trends and so these are all factors that could push SGD higher over the next few months.

Upside resistance at 1.34 should now become apparent now that this prior support level has now been broken in a clear fashion.  If we do see price move back through here, we will revise our stance in ways that will likely focus on the new monetary policy regime mechanisms put in place at the Federal Reserve.

Technical analysis of GBP/JPY for January 02, 2018