The currency markets continue to move forward in the long-term trends that were established in the early parts of this year, with the Euro falling against a broad range of commonly traded forex counterparts.  These trends have been propelled largely by the changing central bank policy that is now seen at the European Central Bank (ECB), as there are still real questions with respect to the directional path that is likely to be taken with interest rates and new stimulus packages.

Generally speaking, lower interest rates or the introduction of quantitative stimulus programs tend to be a negative for a global currency.  Given the current state of affairs in the Eurozone, forex market participants are still looking for more clarification as to whether or not the ECB will start to normalize its policies.  Until this happens, we are likely to see further declines in the Euro against a large basket of its global counterparts, and the broad trends here suggest that most of the commentaries espoused in the social FX trading space have been largely accurate in their forecasts.

Here, we will look at the Euro as it is currently unfolding in its longer-term trends in order to get a sense of the likely support and resistance levels that could be containing market prices into the final months of this year. 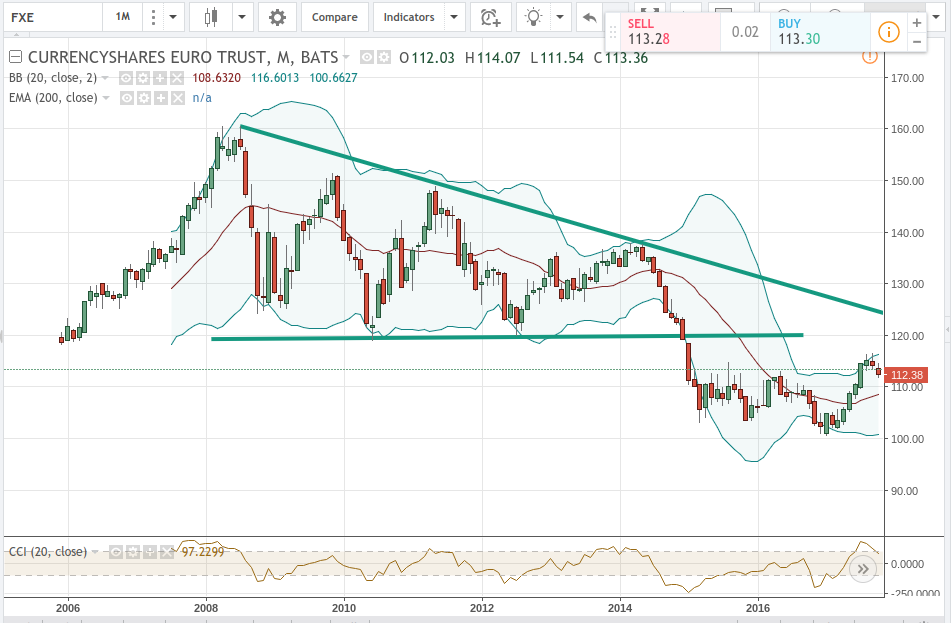 In the chart above, we can see that the longer-term trajectory in the Euro has been in decline since 2009.  If you are playing these trends from a reversal perspective, it makes sense to consider Fibonacci trading strategies in forex movements as this will allow you to identify possible resistance levels where you can either take profits on long positions or because to establish trades in short positions.

Alternatively, it also makes sense to look at the broader activity in emerging markets currencies, as the latest forex trends in the Chinese Yuan could also be indicative of where we are headed next.  Specifically, emerging markets currencies tend to be good indicators of the market’s overall risk tolerance, and so rising trends in the CNY would indicate further weakness in the Euro.  Currently, we are viewing strong support as coming in near the 110.80 level and any downside breaks here should put important currency pairs like the EUR/USD down through major psychological levels before the end of this year.

A MARKET READY TO PULL THE RUG OUT FROM UNDER YOU!

STOCKS ARE AT THE END OF THE LINE – PREPARE YOURSELF NOW!