The foreign exchange market is experiencing a period of increased volatility, showing strong price impulses. The dollar/yen pair has passed more than 400 points in the last day, the pound/dollar – almost 150, the “kiwi” and “loonie” – about 100. In all cases, the dollar for some time significantly strengthened its position, but then just as rapidly fell throughout the market. This difference in mood is due to the changeable fundamental background, which is clearly confusing traders.

The fact is that the dollar last year (especially in the second half of it) actively enjoyed the status of a defensive instrument – even the negative events in the United States increased the demand for the greenback. The US currency had a powerful trump card in the form of the hawkish policy of the Fed, especially against the background of the uncertainty of the rest of the central banks of the leading countries of the world. Now the situation has changed somewhat: the problems in the US are still growing like a snowball, but the position of the Federal Reserve has softened significantly. The results of the December Fed meeting will “chase” the dollar for a long time, especially if the key US economic indicators show a decline in the first half of the year. Some representatives of the American regulator, who had recently voiced the “hawkish” position, added fuel to the fire. Now their rhetoric has changed significantly.

For example, the head of the Federal Reserve Bank of Dallas, Robert Kaplan, said today that the regulator should take a wait-and-see position for at least two quarters of 2019. The essence of his position boils down to the fact that the US-Chinese trade conflict has harmed not only the world economy and not only China – but also the United States. In view of this fact, he expects a slowdown in US GDP growth and inflation this year. The Fed, in his opinion, should react accordingly, so as not to aggravate the already precarious situation. Here it is worth recalling that in the autumn of last year Kaplan stated that 4 rounds of increase would follow to the neutral level of the rate (that is, the neutral level would be at the level of 3.25%). As we see, now his opinion has changed dramatically: now he stands for a six-month pause.

If the rest of the Fed members move to the “dovish” camp in the same way, the dollar finally loses its foothold. In this context, it is important to listen to Jerome Powell, who will speak at the economic conference tomorrow with his predecessors, Janet Yellen and Ben Bernanke. If the incumbent Fed chief also softens his rhetoric (or at least repeats the main points of the December meeting), the dollar index will continue its downward trend.

However, tomorrow is full of other events. First of all, we are talking about the Nonfarm, which can give an additional impetus to dollar pairs. According to preliminary estimates of experts, the number of people employed in the non-agricultural sector in December should increase by 180 thousand, while the unemployment rate will remain at the previous level of 3.7%. This is a good forecast, so if real numbers meet expectations, then the dollar will avoid another wave of sales. 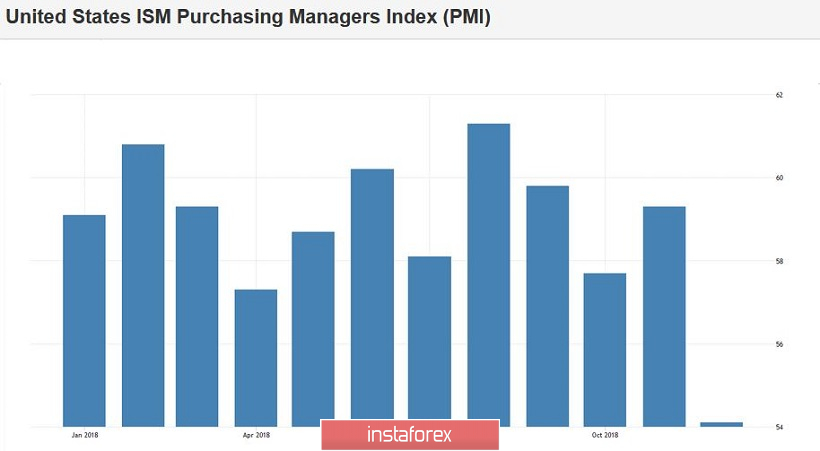 But as shown today, experts can make a big mistake in their estimates: the American manufacturing index ISM, contrary to all forecasts, fell to the mark of 54.1 – this is the weakest result since September 2016. This unexpected result discouraged dollar bulls, after which the EUR/USD pair was able to return to the 14th figure for a short time. If tomorrow’s Nonfarm will present a similar “surprise”, then the market reaction will be more extensive.

Another important release on Friday is the dynamics of wages. The indicator of the average hourly wage in the USA has been fluctuating in the range of 0.1% to 0.3% (m/m) for a long time, although in annual terms the indicator has grown slightly (up to 3.1%). For EUR/USD bears, it is important that the indicator does not cross the zero line on a monthly basis and does not “dive” under the three percent mark in annual terms. This indicator is closely monitored by the Fed, so its negative dynamics will affect the position of the US currency.

Also, we should not forget that tomorrow the release of data on the growth of European inflation is expected. The consensus forecast suggests that the consumer price index will drop again – to 1.8%. Core inflation should remain at the same level – 1%. Any deviations from the forecast scenario will cause strong volatility – depending on the direction in which the pendulum will swing. The recovery of inflation indicators will inspire the bulls of the EUR/USD pair, as the chances of a rise in the ECB rate this year will increase. If the price pressure continues to weaken, the euro will be too vulnerable – even against the background of an uncertain greenback. 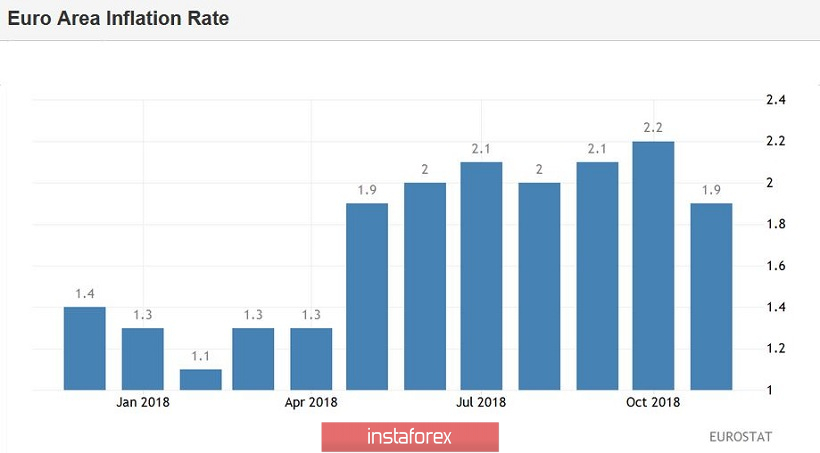 Thus, tomorrow may substantially change the overall fundamental background for the EUR/USD pair. Friday will either restore the dollar’s position, or send it to the next knockdown. It is still important for the bulls of the pair to overcome the upper line of the Bollinger Bands indicator on the daily chart (which corresponds to the 1.1450 mark) to confirm the strength of the upward movement. But bears need to lower the price below 1.1290 (the lower line of the Bollinger Bands on D1) – in this case, the Ichimoku Kinko Hyo indicator will form a bearish “Parade of lines” signal, opening the way for a decline to the bottom of the 12th figure.

Risk of a Weakening Dollar Remains