Fundamental Analysis of AUD/JPY for June 9, 2017 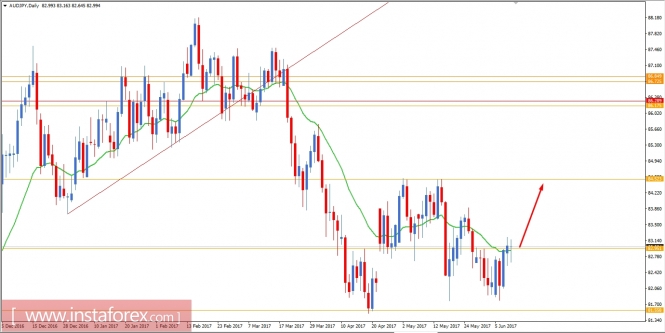 AUD/JPY corrective volatile structure is still in play despite the positive and negative economic reports of the both currencies in the pair. The currency pair is currently residing between the areas of 81.50 to 84.50 and unable to provide any significant trend direction until the price breaks above or below the levels. Despite having worse Trade Balance report yesterday at 0.56B which was expected to be at 1.91B, AUD has managed to gain against JPY with an impulsive bullish move. Today we had AUD Home Loans report which was also published with the worst figure at -1.9% which was expected to be unchanged at -0.9%. The AUD Home Loans report is one of the leading indicators of the economic growth as the more home loans describe more demand in the market where the worst figure seems not to quite dominate the growth of the currency itself. On the JPY side, today M2 Money Stock report was published with a decreased figure to 3.9% from 4.0% previously which was expected to rise to 4.3% but Tertiary Industry Activity report showed a good improvement to 1.2% from -0.3% previously which was expected to be at 0.5%. As of the current situation, AUD is still stronger than JPY despite the negative news on AUD and mixed report of JPY. Currently, a further corrective volatile move is expected in this pair until the price breaks above 84.50 or below 81.50 level with a daily close.

Now let us look at the technical view, the price is currently breaking above the near-term resistance of 83.00 and 20 EMA. The price has already shown rejection of the bears in the market already till now and if we see a daily close above 83.00 level today then we will be looking forward to buying with a target towards 84.50 resistance level in the coming days. The market is currently in a corrective bias and no specific trend move is observed till now.