Fundamental Analysis of EUR/GBP for June 9, 2017 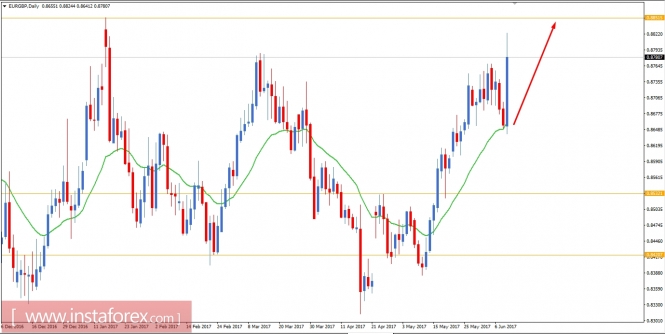 EUR/GBP showed a great amount of bullish pressure from the first hour today. It moved 140+ pips in an hour bouncing off from 0.8650 to 0.8820. Recently Pound had been suffering from Brexit vote and currently from the General Election effects. The pound is currently quite weaker and it may cause the households to suffer from rising inflation and damaging growth forecasts. Theresa May from the Conservative Party is currently leading in the General Election with 46.9% votes ahead of Jeremy Corbyn from the Labour Party with 39.5% votes. Though the election results are yet to be published we have already observed weakness of the Great British Pound in the market today. Additionally, GBP Manufacturing Production report is going to be published today which is expected to rise to 0.8% from -0.6% previously, Goods Trade Balance is expected to be at -12.0B decreasing from -13.4B, Construction Output is expected to be positive at 0.5% from -0.7% previously and Industrial Production report is also expected to show a rise to 0.7% from -0.5%. Today GBP economic events are quite optimistic in nature which might help the Pound to gain some strength but the market is still under consolidation as of the election results to be published soon. On the EUR side, German Trade Balance is going to be published today which is expected to rise to 20.3B from 19.6B, French Industrial Production report is expected to decrease to 0.3% from 2.0% and Italian Quarterly Unemployment Rate is expected to show a decrease in the unemployment rate to 11.6% from 11.9%. To sum up, a good amount of volatility is going to strike the market despite the optimistic economic events on the both currencies and as of the current situation Pound is expected to lose some grounds today against Euro.

Now let us look at the technical view, the price has bounced off the 20 EMA dynamic support level today at the first hour of the market. Currently, the price has already engulfed price actions of the previous number of days and as the price remains above the 20 EMA it is expected that the price will head towards 0.8850 resistance soon. The structure of the currency pair is still residing inside the corrective structure and a break above 0.8850 will signal a further bullish move in this pair in the coming days.