Fundamental Analysis of NZDUSD for November 23, 2017 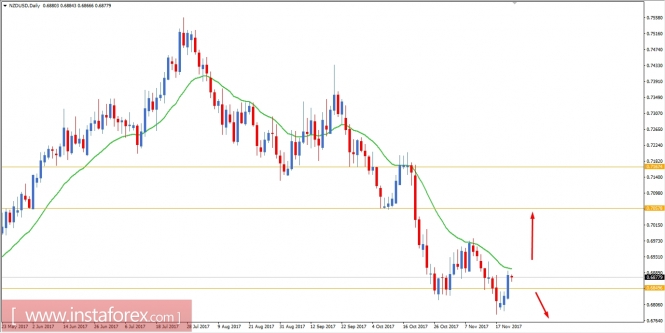 After a long bearish trend in place, NZD/USD has been quite bullish this week which lead to certain gain on the upside breaching above 0.6850 level with a daily close. USD has been quite mixed with the economic reports recently which lead to certain weakness against NZD but today worse economic reports of NZD put a barrier on the bullish run. Today NZD Retail Sales report was published with a significant decrease to 0.2% from the previous value of 1.8% which was expected to be at 0.4% and Core Retail Sales report was also published with a decreased value of 0.5% from the previous value of 1.9% which was expected to be at 0.9%. As the economic reports had a good impact on the currency, NZD is currently struggling to maintain the impulsive bullish momentum which was being carried since the starting of the week. On the other hand, FOMC Meeting held recently was quite dovish in nature where FED hinted about the delay of the further rate hikes which shifted the market sentiment resulting in the weakness of USD. Additionally, today USD is expected to be weaker in comparison due to the holiday being observed for Thanksgiving Day. Though Rate Hike in December is quite confirmed, due to indecision and dovish nature from FED, the market sentiment is still confused. As of the current scenario, NZD is expected to gain short-term momentum resulting in certain push upward before the price continues with the bearish trend in the coming days.