Fundamental Analysis of USD/CAD for August 2, 2017 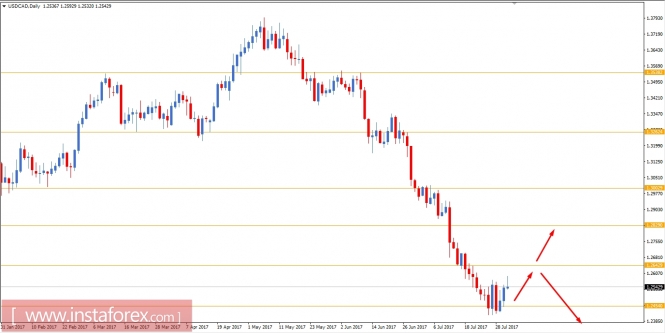 USD/CAD has been quite volatile and residing inside a corrective structure between 1.2450 to 1.2650. CAD has been quite hawkish in sentiment after the recent rate hike but recently the market seems to be slowed down with the gains where the possible factors could be a lack of high impact economic events of CAD getting published recently. On the other hand, USD has been having a streak of bad economic reports recently for which it failed to gain over the CAD recently. Today USD ADP Non-Farm Employment Change report was published with the worst figure at 178k from the previous value of 191k which was expected to be at 187k but Crude Oil Inventories report showed less deficit at -1.5M from the previous value of -7.2M which was expected to be at -3.2M. Throughout the day USD has been quite stronger in the form of gaining which was turned to drastic weakness after the worst ADP report hit the market. This week Friday is going to be a very important day for both currencies of this pair as USD Non-Farm Employment Change, Unemployment Rate and Average Hourly Earnings reports will be published which is currently forecasted to have negative impact for the currently and CAD Trade Balance report, Employment Change report is also going to be published which is also expected to be dovish in nature as well. This week the market is expected to be very volatile in this pair until the end unless any impulsive directional breakout is observed in this pair.

Now let us look at the technical view, the price is currently showing some bullish rejection after the bad economic reports published on the USD side which crushed all its gains throughout the day. Currently, the price is still expected to surge up higher towards 1.2650 before showing some bearish pressure in this pair with a target towards 1.2450. As the price remains below 1.2650 with a daily close the bearish bias is expected to continue further in this pair.

Daily Market Report – EUR/USD Is This A Valid Breakout? August 3, 2017