Fundamental Analysis of USD/CHF for November 17, 2017 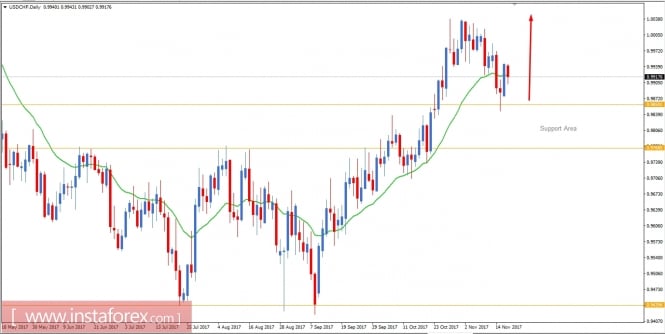 USD/CHF has been quite bullish recently after bouncing off the 0.9860 support area. USD has been quite mixed with the economic reports this week which did lead to some bullish intervention along the way but was not quite impulsive in nature. Today we do not have any CHF economic reports or events to impact the market, but this week CHF had PPI report was published unchanged at 0.5% which was expected to decrease to 0.2%. The positive economic report did help the currency to gain somehow over USD but could not sustain it longer. On the USD side, today Building Permits report is going to be published which is expected to increase to 1.25M from the previous figure of 1.23M and Housing Starts is expected to increase as well to 1.19M from the previous figure of 1.13M. The USD is still quite on backfoot due to a quite indecisive market sentiment, but it is expected to have an upper hand over CHF. Ahead of the Rate Hike in December the USD is expected to gain momentum and proceed further with the gains against CHF in the future.

Now let us look at the technical view, the trend of this pair is currently quite bullish in nature which was quite non-volatile while breaking above the 0.9860 price level with a daily close. The price is currently residing in the support area of 0.9770 to 0.9860 from where the price recently bounced back with a bearish rejection with the target towards 1.01 resistance area. As the price remains above the support area the bullish bias is expected to continue further.