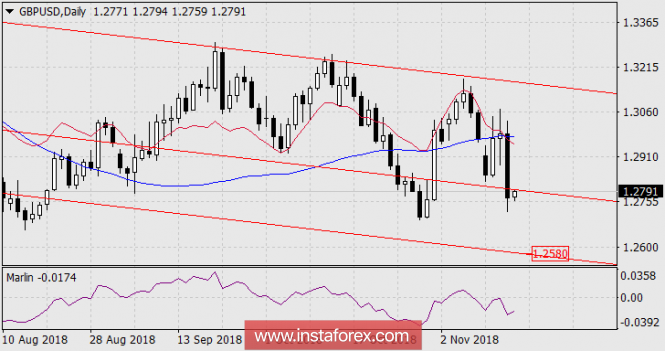 The tragedy of the British pound on Thursday broke out rapidly. Brexit Minister Dominic Raab and Northern Ireland Affairs Sheiles Vara, resigned due to disagreement with the Prime Minister’s position on the EU deal. In turn, Teresa May confirmed her intention to leave the EU no later than March 29, 2019. The data on October retail sales were pessimistic: -0.5% against expectations of a 0.2% growth after the September decline of -0.4%. In the US, retail sales showed an increase of 0.8%. As a result, the pound sterling collapsed by 214 points.

On the daily scale chart, the price went under the trend line of the price channel. In both charts – daily and H4, there is not a single sign for price reversal up except that convergence with the Marlin oscillator on the four-hour chart. But in this case, the pattern can be taken as an artifact as a tool’s reaction to previous strong movements.

The volume of industrial production in the US in October today may show an increase of 0.2%. We ook forward to further decline of the pound to support the underlying trend line in the area of 1.2580.

US government bond yields skyrocket to 3.8%

Technical analysis for EUR/USD for November 16, 2018