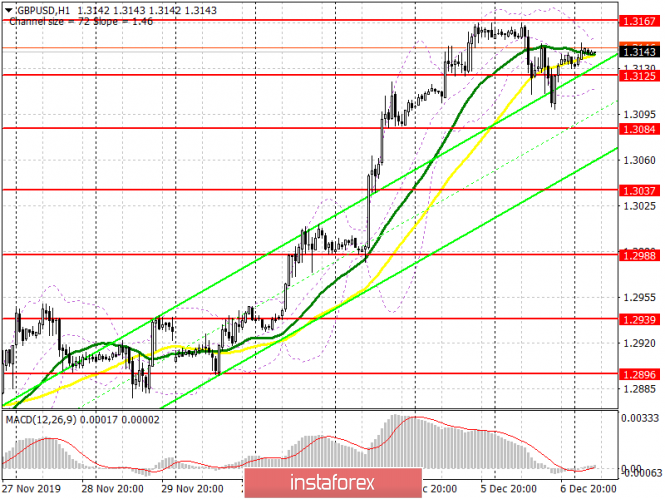 The British pound continues to be in demand among buyers and did not decline much after a good report on the state of the US labor market, which once again strengthened the confidence of traders that the Federal Reserve will not rush to lower rates at the end of this year. The bulls managed to regain the support level of 1.3125 on Friday and at the moment, their main task will be to protect this range. The formation of a false breakout on it will be an additional signal to open short positions but the main goal will be a breakthrough and consolidation above the resistance of 1.3167, which will open a direct road to the area of the highs of 1.3227 and 1.3265, where I recommend taking the profits. If opinion polls point to a decline in the UK Conservative Party’s leadership, the pressure on the pound could intensify. In this case, it is best to open new long positions only after updating the lows of 1.3084 and 1.3037.

Sellers are in no hurry to return to the market and this was seen after the weak downward movement of GBP/USD on the background of the release of the report on the state of the US labor market, where the unemployment rate fell. At the moment, the bears will continue to actively defend the resistance of 1.3167, as above this range there is a mass of stop orders of sellers, the demolition of which will carry the pair even higher. The formation of a false breakout at 1.3167 will be a signal to sell the pound, but it is best to open short positions immediately on the rebound from the highs of 1.3227 and 1.3265. A more important task for sellers will be to break and consolidate below the intermediate support of 1.3125, which will increase the pressure on the pair and lead to a downward correction in the area of the lows of 1.3084 and 1.3037.

Trading is conducted in the area of 30 and 50 moving averages, which indicates another pause of buyers before the release of important data.

Breaking the upper limit of the indicator around 1.3155 will lead to a more powerful bullish impulse. A break of the lower border around 1.3116 will increase the pressure on the pair.

Source:: GBP/USD: plan for the European session on December 9. The pound is waiting for new opinion polls and did not react strongly