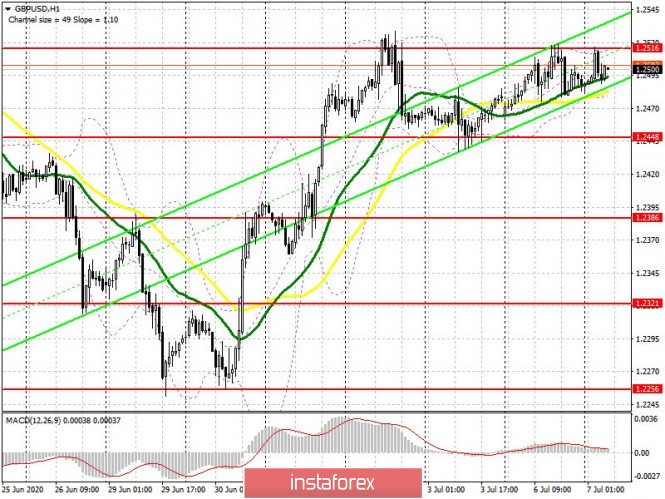 From a technical point of view, only the resistance level of 1.2516 has changed since yesterday, which is the upper limit of the base that buyers of the pound have formed to continue the bullish momentum. It was not possible to wait for signals to enter the market yesterday amid such low volatility. The Commitment of Traders (COT) reports for June 30 recorded another increase in short and long positions, which indicates a confrontation between buyers and sellers. The latter needs to be more active to return the wounds to their side. The chart shows that the demand for long positions increases every time the price drops more or less interestingly. The COT report indicates that there was an increase in short non-commercial positions from 48,170 to 55,414 during the week. During this time, long non-commercial positions rose from the level of 29,654 to the level of 34,424. As a result, the non-commercial net position increased its negative value to -20,990 against -18,516, which indicates that the market is still under pressure after the bulls’ unsuccessful attempt to continue the upward trend last week. As for the current situation in the market, the primary task of buyers is to break through and consolidate above the resistance of 1.2516, which should lead to the demolition of the bears’ stop orders and a larger increase in GBP/USD to the high of 1.2585, where I recommend taking profits. The long-term goal will be a high of 1.2676. If there is no active growth above the resistance of 1.2516, it is best to postpone long positions on the pound until a decline and update the support of 1.2448. However, you can buy GBP/USD there after a false breakout has formed, since a break in this range can return pressure to the pair. With a larger fall in the pound, it is best to open long positions for a rebound from the support of 1.2386, counting on a correction of 30-35 points at the end of the day.

Sellers of the pound will definitely be more active in the resistance area of 1.2516, and the pair’s direction will depend on what will happen on it. Forming another false breakout at this level will be an accurate signal to sell GBP/USD in the hope of resuming the downward correction to the low of 1.2448. However, after consolidating below this range, it will be possible to talk about the bears’ return to the market, betting on the pound’s fall to a low of 1.2386 and 1.2321, where I recommend taking profits. In the GBP/USD growth scenario, it is best to postpone sales until a false breakout is formed at the level of 1.2585, but you can safely open short positions immediately for a rebound after testing the high of 1.2676, counting on a correction of 30-40 points within the day.

Trading is conducted in the area of 30 and 50 moving averages, which indicates market uncertainty.

Volatility has decreased, which does not provide signals for entering the market.