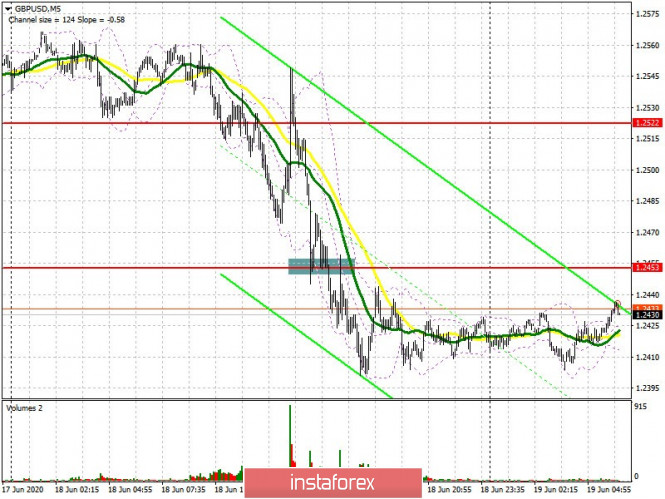 Bank of England Governor Andrew Bailey’s recent statement that the UK economy is recovering better than the central bank’s forecasts did not have the desired effect, which left the British pound under pressure right after the regulator expanded its bond redemption program. If you look at the 5-minute chart, you will see how the next signal was formed to increase short positions in the afternoon, which many of you could hold even after working out the morning sell signal. A break and consolidation below the level of 1.2453, to which I paid attention, became an additional point for selling GBP/USD. At the moment, the situation has changed a bit after the Asian correction. You can see new support at 1.2406 on the hourly, which pound buyers need to protect. Forming a false breakout there along with the divergence that forms on the MACD indicator will be a good signal to buy the pound based on an upward correction, at least to the resistance of 1.2476. Consolidating at this level will lead to larger growth of GBP/USD to the area of a high of 1.2545, where I recommend taking profits. If the pressure on the pound remains in the morning, then it is best to return to purchases only after updating the low of 1.2344, or buy the pound immediately to rebound from the low of 1.2290, counting on a correction of 30-40 points by the end of the week. It is also worth recalling that there have been serious changes in the COT reports that could affect the British pound. A sharp decrease in short positions and an increase in long ones were recorded in the report for June 9, which indicates a completely possible change in the market direction in favor of strengthening the pound. There was a reduction in short non-profit positions from the level of 63,014 to the level of 52,941. By the way, this is the first reduction in short positions since April 14 of this year. At this time, long non-profit positions sharply rose from 26,970 to 28,893. As a result, the nonprofit net position reduced its negative value to -24,048, versus -36,044, which indicates a possible market reversal and build up of a new bullish momentum in the medium term. Updating current lows will be an additional incentive for purchases at attractive prices.

Sellers quickly took advantage of the confusion in the market and continued their downward correction, which suggested itself at the end of last week. At the moment, their goal is to break through and consolidate below the support of 1.2406, which will increase the pressure on the pair and lead to a test of a low of 1.2343. It will be possible to count on updating the 1.2290 area only under the condition of very weak retail sales reports in the UK, which is set to be released today in the morning. In the GBP/USD growth scenario, you can closely look at short positions after forming a false breakout in the resistance area of 1.2476. In the absence of activity there on the part of sellers, I recommend to postpone short positions on the pound until the renewal of a larger local high of 1.2545 while expecting a 30-40 points rebound. 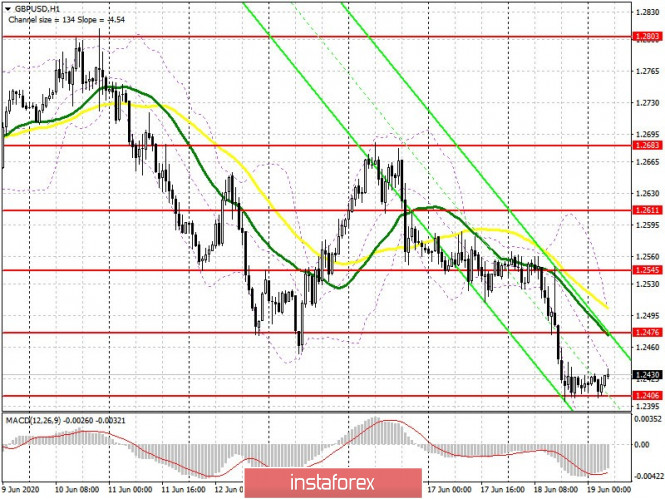 Trading is carried out below 30 and 50 moving average, which indicates the formation of a downward correction in the pair.