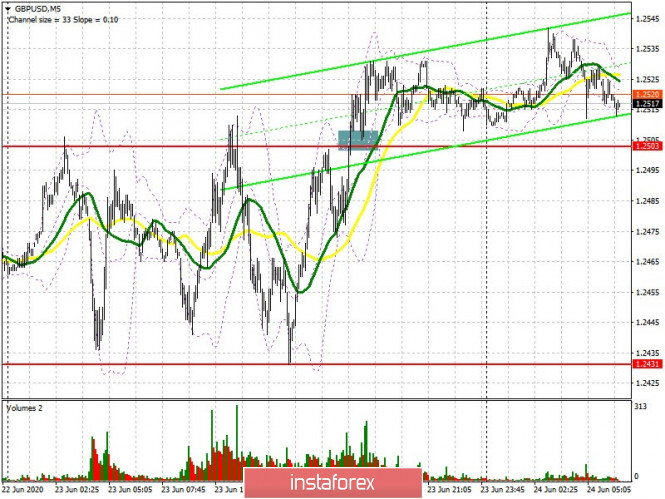 The British pound was in the side channel all day yesterday, creating excellent buy and sell signals, I mentioned the probability of it in my forecast. If you look at the 5-minute chart and remember my review from yesterday afternoon, you will see how the bulls tried to gain a foothold above the resistance of 1.2503 for the third time, which they managed to do. After that, a signal was formed to buy the British pound, which continues to work out at the moment. Demand for the pound will remain as long as trade is conducted above 1.2508, and forming the next false breakout there will be an additional signal for opening long positions. Today, bulls will initially aim for resistance at 1.2585, a break which will provide GBP/USD with a more powerful upward momentum with a high of 1.2676, where I recommend taking profits. In case the pound returns to the area of 1.2508, and this can happen against the background of the absence of important fundamental statistics today, it is best to consider new long positions after updating yesterday’s large support area at 1.2435, counting on a rebound of 30-40 points by the end of the day. It is also necessary to remember that the British pound’s situation is rapidly changing in favor of buyers. The COT report states that last week short non-profit positions were reduced from 52,941 to 45,376. At that time, long non-commercial positions sharply rose from 28,893 to 29,379. As a result, the non-commercial net position decreased its negative value to -15,998, against -24,048, which indicates a possible market reversal and building a new bullish momentum in the medium term.

Pound sellers will try their best to regain the 1.2508 area, consolidating below which will be an excellent signal to open short positions. The goal will be to return GBP/USD yesterday’s major support at 1.2435 and its breakout, since consolidating below this level will be a turning point and will return the bearish momentum to the market, which can lead to updating lows 1.2381 and 1.2334, where I recommend taking profit. If the bulls continue to bend their line, then most likely the sales will have to be postponed until the resistance test of 1.2585, subject to forming a false breakout, but I advise you to open short positions immediately for a rebound only after updating last week’s high in the area of 1.2676 while expecting a rebound of 30-40 points by the end of the day. Trade is conducted above 30 and 50 moving averages, which indicates continued growth of the pound in the short term.

Source:: GBP/USD: plan for the European session on June 24 (analysis of yesterday’s deals). Pound not pleased with the increase in