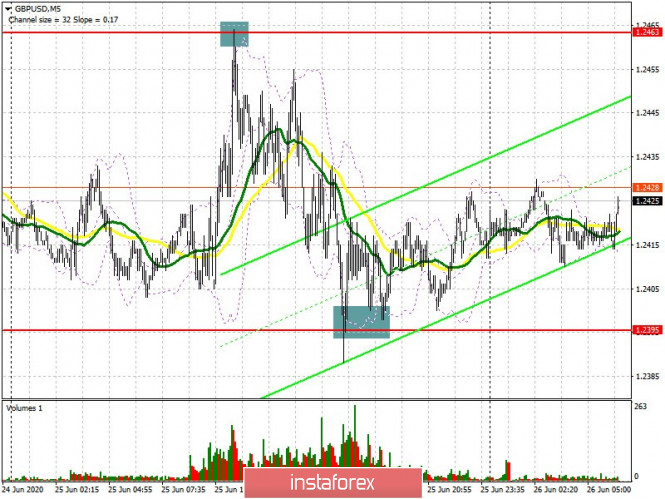 Nothing has changed from a technical point of view. A signal was formed yesterday, both for the selling the pound and its purchase in the afternoon. I drew attention to their probability in my reviews. If you look at the 5-minute chart you will see that the resistance was updated at 1.2463 yesterday in the morning, which led to forming a sell signal, while the bulls showed themselves in the support area of 1.2395, forming a false breakout there, which was a good point to open long positions on pound. In order to prevent forming a bearish market today, buyers need to protect support at 1.2395, where forming a false breakout, similar to yesterday, will be a signal to open long positions while expecting a return to resistance 1.2463, where the moving averages are held. It depends on this level whether the bulls will be able to continue the upward correction this week or not. Consolidating above will be a signal to open long positions based on updating the weekly high in the area of 1.2536, where I recommend taking profits. If there is no activity in the support area of 1.2395, it is best to abandon long positions until the low of 1.2334 is updated and buy the pound there for a rebound counting on a correction of 30-40 points within a day. Also, do not forget about the interest of large players. The COT report states that last week short non-commercial positions were reduced from 52,941 to 45,376. At that time, long non-commercial positions sharply rose from 28,893 to 29,379. As a result, the non-commercial net position decreased its negative value to -15,998, against -24,048, which indicates a possible market reversal and building a new bullish momentum in the medium term.

Pound sellers will follow the Bank of England’s quarterly newsletter today, which could lead to another pound sale. COnsolidating below support 1.2395 in the morning will be a good signal to open short positions in the hope of continuing a downward trend to the low of 1.2334, the test of which will completely erase the bullish momentum formed earlier this week. A break of 1.2334 will pull down GBP/USD to a low of 1.2290, where I recommend taking profits. Bulls can try to save the situation in the morning, so forming a false breakout in the resistance area of 1.2463, where the moving averages also take place, will be a good signal to open short positions. I recommend selling GBP/USD immediately for a rebound today from a weekly high in the region of 1.2536, counting on a correction of 30-40 points within the day. 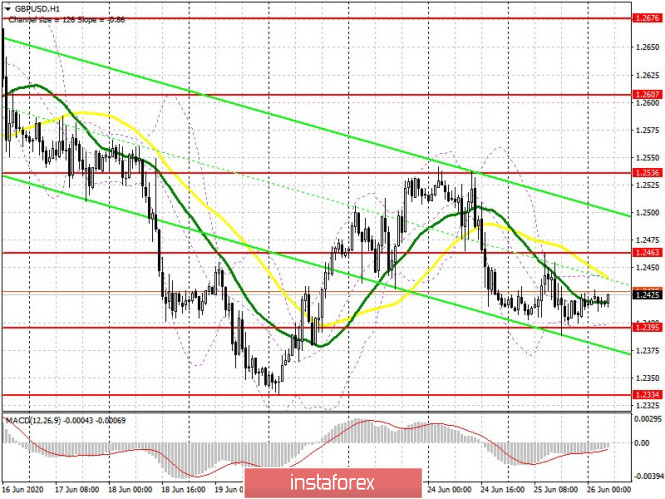 Trading is below 30 and 50 moving averages, indicating a further decline in the pound.

A break of the lower border of the indicator at 1.2395 will increase pressure on the pound. You can count on an upward correction only after a breakout of the upper boundary of the indicator in the region of 1.2440.

Source:: GBP/USD: plan for the European session on June 26 (analysis of yesterday’s deals). Pound locked in the channel. COT reports.