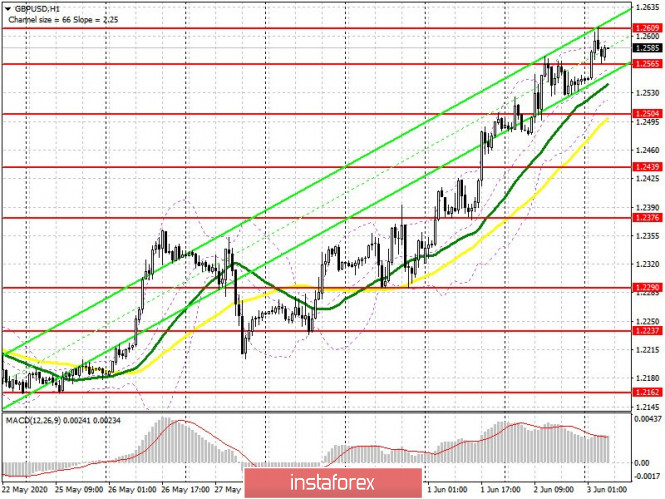 Despite another futile round of trade negotiations between the UK and the EU, traders continue to buy the British pound amid a weak US dollar, which remains under pressure due to riots in the United States. However, it is worth paying attention that the COT reports for the past week remain on the side of the pound sellers, so you should be extremely careful with further purchases at highs. The COT report states that short non-profit positions increased from 54,799 to 61,449 during the week, while long non-profit positions also increased from 35,810 to 39,192. As a result, the non-profit net position became even more negative and turned out to be at the level of –22,257, against –18,989, which so far indicates that the medium-term bearish trend has remained in GBP/USD. As for the short-term technical picture of the pound, the bulls are focused on a breakthrough of resistance at 1.2609, consolidating on it can result in the pair’s growth in the area of highs 1.2647 and 1.2686, where I recommend taking profits. Also, do not forget to retaining 1.2565 support, since forming a false breakout on it will be a signal to open long positions while expecting the bullish trend to continue. If the pair falls below this level, it is best to wait until the low of 1.2504 is updated, where the moving averages go, or buy GBP/USD immediately to rebound from the larger level of 1.2439, where buyers will try to form a new lower boundary of the ascending channel.

Sellers are still quite cautious and are not in a hurry to return to the market even at current highs, since it is not clear what the current situation with the unrest in the US will lead to. The initial task of the bears is to maintain the resistance of 1.2609, since a false breakout there will be the first signal to sell the pound, which can lead to a breakthrough and consolidation below the support of 1.2565, which is very important for the current short-term outlook. Movement below the 1.2565 level will force many speculative buyers to close long positions, and this will lead to selling GBP/USD to the low of 1.2504 and 1.2439, where I recommend taking profits. However, updating these supports will only be considered as a correctional movement within the upward trend of May 18. In case the pound grows further, it is best to return to short positions only after updating resistance at 1.2647, or even higher – from a high of 1.2686 while aiming for a downward movement of 30-35 points to close the day.

Trade is conducted above 30 and 50 moving averages, and the market is on the side of pound buyers.

Source:: GBP/USD: plan for the European session on June 3 (analysis of yesterday’s deals). Pound buyers believe in a bright future.