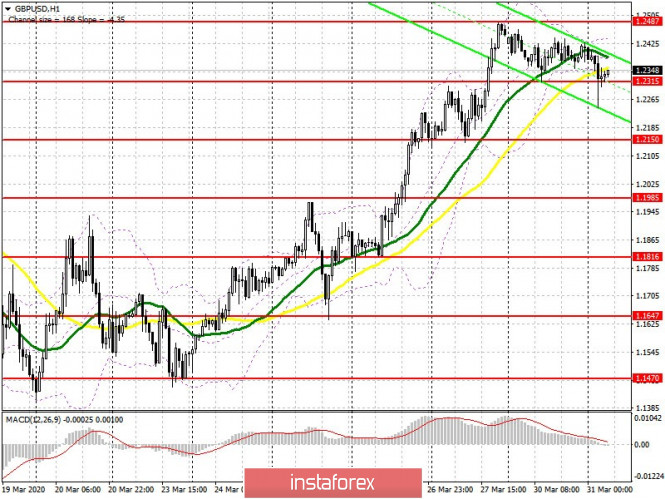 The British pound is still trading in a narrow channel, if you can say so, against the US dollar amid the absence of important fundamental statistics. However, today in the Asian session, the bears made an attempt to break below the 1.2315 level, but this did not bring them success. In the COT reports (Commitment of Traders) for March 24, there is clearly no desire for traders to go to such a volatile market and take any action with the pound. There was a reduction in both long and short positions. According to the data, during the reporting week, there was a decrease in short non-commercial positions from 37,935 to 36,650, while long non-commercial positions also fell from 56,575 to 46,534, and the sharp collapse of the pound to the lows of 1985 indicates a void in the market and the lack of major local support at that time. As a result, the non-commercial net position also fell to 10,884 from 18,640. Today we are releasing important fundamental statistics on UK GDP for the fourth quarter, which is unlikely to be of serious significance for the future situation and for the market as a whole, since the entire focus is now shifted to the first quarter of this year, when the spread of the coronavirus began. At the moment, buyers will focus on holding the 1.2315 support, and as long as trading is above this level, demand for the pound will continue. Good data on UK GDP may lead to a temporary increase in the GBP/USD to the resistance area of 1.2487, the breakout of which will provide a direct path to the highs of 1.2605 and 1.2686, where I recommend taking profits. In the scenario of a further correction of the pound to the level of 1.2315, you do not need to rush to open long positions. It is best to wait for the support test of 1.2150, or buy immediately for a rebound from the low of 1.1985.

Sellers of the pound need to try to return the market under their control, and to do this, it is necessary to consolidate below the support of 1.2315. The first attempt to do this was unsuccessful today in the Asian session. A break of this level will lead to a larger sell-off of GBP/USD in the area of lows 1.2150 and 1.1985, where I recommend taking profits. The 1.1985 support test will also indicate the resumption of the bear market. In case bulls attempt to resume the upward trend, only the formation of a false breakout in the resistance area of 1.2487 will be the first signal to open short positions. Otherwise, it is best to sell the pound on a rebound from the highs of 1.2605 and 1.2686.

Trading is conducted in the area of 30 and 50 moving averages, which indicates market uncertainty with a further prospect of a pound decline.

Source:: GBP/USD: plan for the European session on March 31. COT reports indicate a clear lack of willingness to trade the British