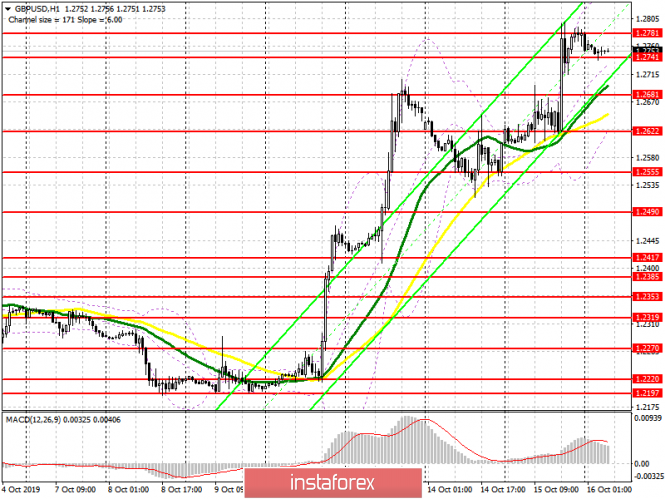 The pound may continue to grow further, but only after the publication of the text of the Brexit agreement, which Boris Johnson agreed with the EU representatives. However, a larger upward trend requires support from the UK Parliament.Today, it is best for buyers to expect a breakthrough and consolidation above the resistance of 1.2781, which will lead to a further upward trend and update new highs in the areas of 1.2858 and 1.2916, where I recommend profit taking. If, after the publication of the text of the deal, dissatisfied MPs appear, a downward correction of the pound is not excluded. In this scenario, it is best to consider new long positions only after the formation of a false breakout in the support area of 1.2741, or buy the pound immediately for a rebound after a test of the lows at 1.2681 and 1.2622.

It is best to open short positions on the pound only after the reaction of the British Parliament to the published text of the deal, which was agreed this week with EU representatives. The formation of a false breakdown in the resistance area of 1.2781 will be the first signal to open short positions, but it is best to wait for the highs to update near 1.2858 and 1.2916 and the divergence on the MACD indicator, which will be an additional signal to sell the pound. Bears aim to return GBP/USD to the support level of 1.2741, which will increase the pressure on the pair and lead to an update of the lows in the areas of 1.2681 and 1.2622, where I recommend profit taking.

Trading is conducted above 30 and 50 moving averages, which indicates the maintenance of a bullish trend.

In case the pound declines, support will be provided by the lower boundary of the indicator in the area of 1.2650. Growth will be limited by the upper level at 1.2835.

Source:: GBP//USD: plan for the European session on October 16. Pound awaits Parliament approval of agreement and text of Brexit deal