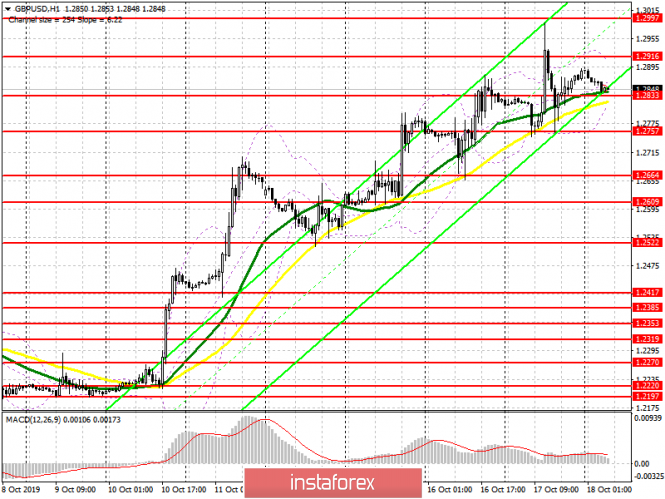 The pound made another attempt to rise yesterday afternoon, which was limited to the resistance area of 1.2890. Further movement will depend directly on Boris Johnson’s negotiations with Labour and the Democratic Unionist Party of Great Britain. While the former remain silent on the subject of the Brexit deal, the latter said yesterday that they are categorically against the deal. If Johnson enlists support, demand for the pound will return, and a breakthrough and consolidation above the resistance of 1.2916 will lead the pair to new local highs in the area of 1.2997, 1.3037 and 1.3074, where I recommend profit taking. Any negative background will put pressure on GBP/USD, so only the formation of a false breakout in the support area of 1.2833 will be a signal to buy the pound. In a different scenario, the pair will fall below the support of 1.2833, long positions can be returned to rebound from the lows of 1.2757 and 1.2664.

Sellers need bad news on Brexit, and the formation of a false breakout in the resistance area of 1.2916 will be an additional signal to sell the pound. However, the more important task of the bears today is to return and consolidate the pair below the support of 1.2833, which will push the pound to the lows of 1.2757 and 1.2664, where I recommend profit taking. However, such a downward movement will only be possible if Labour refuses to support the Brexit deal, which will make it very difficult for Boris Johnson to “live” ahead of tomorrow’s vote in Parliament. In the scenario of the pound’s further growth above the resistance of 1.2916, short positions can be looked at after the test of the highs of 1.2997 and 1.3074.

A break of the lower boundary of the indicator at 1.2833 may put pressure on the pair. Growth will be limited by the upper level at 1.2916.

Source:: GBP/USD: plan for the European session on October 18. The pound will rise if Labour supports the deal on Brexit. Parliamentary