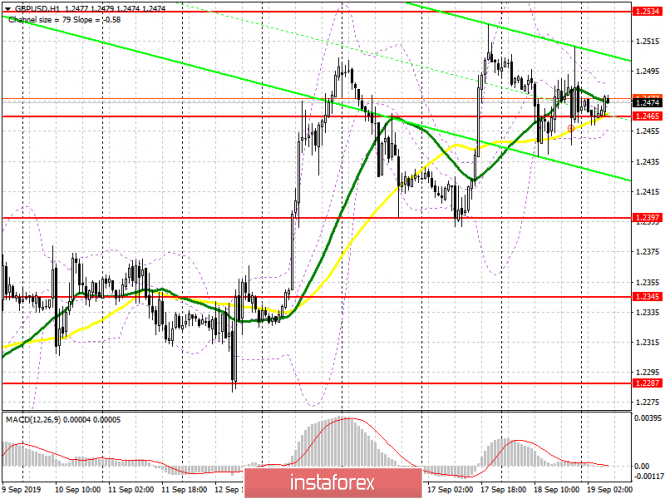 Today, the Bank of England will announce its decision on interest rates, and the further direction of the pound will depend on it. It is expected that the regulator will leave the current monetary policy unchanged. Buyers need to wait until a false breakdown forms in the support area of 1.2465, which will resume demand for the pound and lead to a further upward trend in GBP/USD, the aim of which is to break the resistance of 1.2534, which will only strengthen the bullish sentiment. In this scenario, we can expect the highs to be renewed around 1.2563 and 1.2600, where I recommend taking profits. When the pound drops to a support of 1.2465 in the morning, it is best to consider new long positions on a rebound from a large low of 1.2397.

Sellers will rely on less aggressive statements by the Bank of England on raising interest rates in the future, which will weaken the pound. The formation of a false breakdown in the resistance area of 1.2534 will be the first signal to open short positions. However, a more important task in the first half of the day will be to break the low at 1.2465, which could further pull down GBP/USD to the levels of 1.2397 and 1.2345, where I recommend taking profits. If the bullish sentiment persists, then it is best to count on new sales after the test of a high of 1.2600, or even higher, from the level of 1.2639.

Trade is conducted in the region of 30 and 50 moving averages, which indicates market uncertainty amid important data.

Volatility is low, which does not provide signals on entering the market.

Source:: GBP/USD: plan for the European session on September 19. Pound buyers regained 1.2465 and are waiting for the Bank of England’s