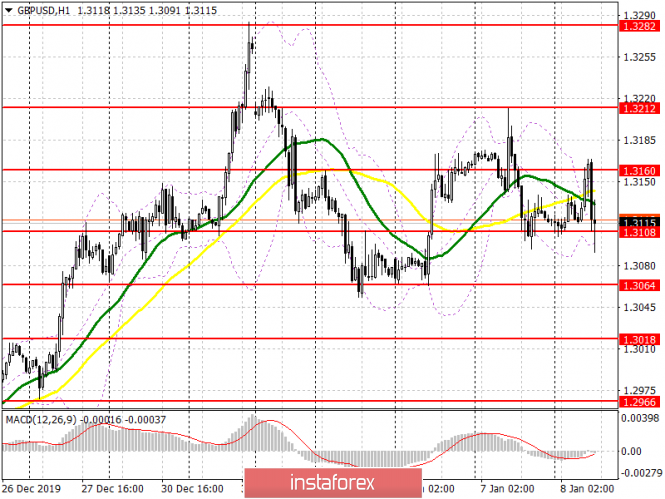 As they did yesterday with the level of 1.3212, the same thing happened today in the resistance area of 1.3160, where the sellers of the pound again confidently declared themselves, which I paid attention to in my morning forecast. At the moment, buyers continue to actively fight for the support of 1.3108, to break below which the first time failed. However, if there is no activity on the part of the bulls in the second half of the day and the GBP/USD again falls to this range, it is best to postpone long positions until the lower border of the side channel 1.3064 is updated. An equally important task for buyers of the pound will be to break through and consolidate above the resistance of 1.3160, which will keep the pair’s upward potential and lead to an update of the highs of 1.3212 and 1.3282, where I recommend taking the profits.

Sellers coped with the morning task and did not let the pair above the resistance of 1.3160. At the moment, the new target of the bears is the intermediate support of 1.3108, which was tested yesterday in the US session and managed to keep the pound from falling today in the first half of the day. Only a breakout and consolidation below this range will increase the pressure on the pair, which will lead to a test of the lower border of the side channel 1.3064, where I recommend taking the profits, as this area will once again be active buyers of the pound. If the demand for GBP/USD returns in the second half of the day, it is best to return to short positions only after the formation of a false breakout in the resistance area of 1.3160, but I recommend selling for a rebound only after the highs of 1.3212 and 1.3282 are updated.

Trading is conducted in the area of 30 and 50 moving averages, which indicates the equality of buyers and sellers.

Only a breakthrough of the upper border of the indicator in the area of 1.3155 will allow us to count on a larger upward movement. Breaking the lower border at 1.3090 will increase the pressure on the pound.

Source:: GBP/USD: plan for the US session on January 8. Bears declare themselves at any attempt to increase the pound

The collapse of the Boeing after another 737 crash