How to Utilize Oscillators

Forex traders have been using technical analysis for decades to have them get an upper leg on the markets. There are numerous forms of technical and fundamental analysis and the more practice and effort a forex trader puts into honing their skills, the greater the likelihood they will master understanding how to predict price action. One of the most widely utilized tool used by traders are indicators. Indicators are extremely helpful when it comes to visualizing price action. Indicators help define movement of when to buy and sell. When focusing and understanding oscillators, you will come to realize that oscillators are useful in determining market turning points. Oscillators will typically change before prices changes and again are very helpful in identifying price turning points.

What do oscillators show? In a nutshell, forex oscillators provide valuable information to traders, when the market reaches its limit based in any direction. In addition, it will also help the trader get a better handle on when an opposite correction of a trend will take place. Typically, when price action goes too high this is a sign that the markets are overbought. What this means is that price will remain fixed or that price action will begin to slide backward. The movement in price action backward can take place either quickly or for a longer period of time. During negative correction, new traders usually enter the market which will push prices upward. In general and as a rule of thumb, it may be better to purchase an oversold market and sell when the market is overbought. The oscillator will show its value when price action starts to reach the upper extreme. When price starts to the upper extreme the price would be deemed as oversold.

Not only are oscillators utilized to help determine overbought and or oversold markets, they are also good at identifying breaking points in price movement. When the lines begin to move in opposite directions this means that the trend is starting to lose momentum.

It should be noted that oscillators are usually most beneficial when the markets/charts do not infer a concrete trend in either direction. When trending markets occur, oscillator signals need to be studied with great caution considering that false signals typically stand for a strengthening of the trend. In addition, an uptrend will show an overbought condition while a downward trend will show an oversold condition.

Another widely utilized Oscillator is The Relative Strength Index (RSI). The RSI was created by J. Welles Wilder and is considered a momentum indicator which measure speed as well as change of price movements. The RSI typically oscillates between 0 and one hundred. RSI is usually considered overbought when the price action is above seventy and oversold when the price action is below thirty. In addition, RSI is also used to help identify general trends. In addition, RSI forms chart patterns which might not show on the underlying price chart. The basic formula for RSI is RSI = 100-[100/(1+(Average of upward price change/Average of downward price change))].

The Elder-Ray indicator was created by Dr. Alexander Elder and utilizes moving averages along with the difference of high pricing values along with low pricing values. Today, the Elder-Ray indicator sets are included in most technical analysis software and are considered as bull and bear power indicators. The graphic displays of Dr. Elder’s trading system give the trader a strong perspective in the different ways in which the markets flow allowing them to capture opportunities along with information which would be harder to visualize otherwise. Again, the main indicators provided within the Elder Ray Index are the bull power, bear power and the thirteen period exponential moving averages. Dr. Elder Ray’s trading technique was created to trade the daily time frames.

In closing, the number of tools which a trader may leverage off of is growing at a rapid pace. Indicators are an excellent tool for the trader to visualize price action. In addition, indicators help traders define movement of when they may buy and sell the markets. Overall, oscillators are strong tools which may help the trader determine market turning points.

The post How to Utilize Oscillators appeared first on Forex.Info.

Source:: How to Utilize Oscillators

Market Participants Getting to Grips with UK Leaving EU 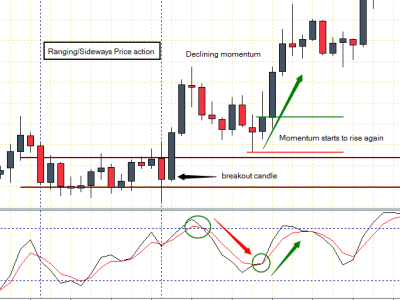 Stochastics Oscillator – A versatile oscillator for a trend following strategy