The U.S. dollar was seen holding ground on Thursday albeit trading mixed. Economic data on the day included the UK’s services PMI. Data showed that services sector activity increased modestly from March’s 51.7 to 52.8.

In the Eurozone, the flash inflation estimates showed that headline inflation rebounded to 1.2% but this was below forecasts of a 1.3% increase. Core inflation rate eased further to 0.7%.

The ISM’s non-manufacturing PMI data showed that the index eased to 56.8 missing forecasts and down from March’s reading of 58.8

Looking ahead, the economic data for the day will see the nonfarm payrolls report standing out. Median forecast point to the U.S. unemployment rate potentially easing to 4.0% in the month of April. The number of jobs added during the month is expected to rebound from March’s 103k to 189k. Wage growth which also remains a key component is expected to show a 0.2% increase on a month over month basis. A better than expected report could potentially renew hawkish bets on the U.S. dollar.

Elsewhere, the Canadian Ivey PMI data is due to be released today. A number of Fed speeches are also lined up including Dudley, Williams and Quarles. 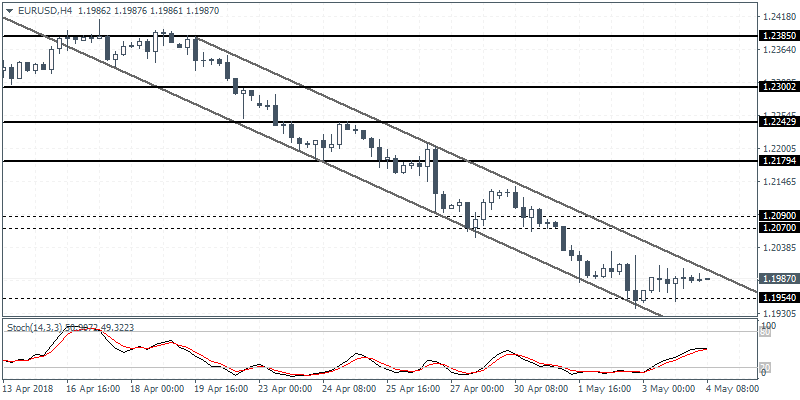 EURUSD (1.1987): The EURUSD was seen closing weaker on the day as price action fell to a fresh 4-month low at 1.1954. The decline to this support level coincided with the support level that was established in late November 2017. Price action has remained slightly volatile after slipping to this level. In the near term, we expect to see the EURUSD consolidate around this level of support before possibly posting a rebound. The resistance level at 1.2090 – 1.2070 remains as a key level to the upside and therefore, the EURUSD could remain range bound within these levels. 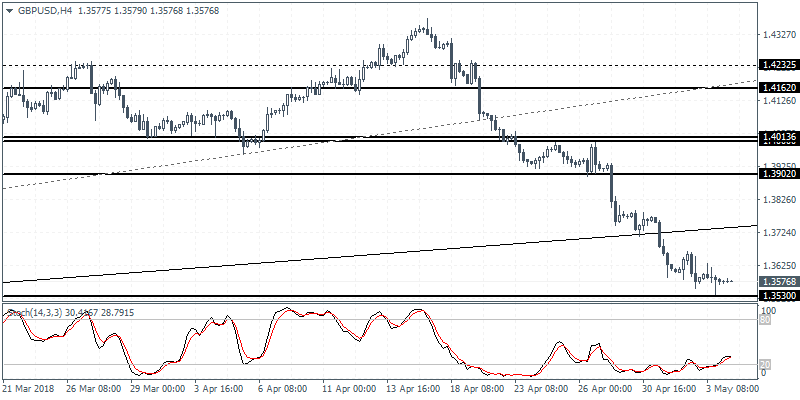 GBPUSD (1.3576): The British pound continued its decline although price action remains supported above the price level of 1.3530. The weaker services PMI data cast doubts on whether the BoE would be able to hike rates next week. This led to the GBPUSD posting declines. From a technical outlook, we expect to see the currency pair consolidating near the current levels of support. A rebound off this price level could signal a potential move to the upside. The breached trend line remains a key dynamic resistance level if there is a correction. 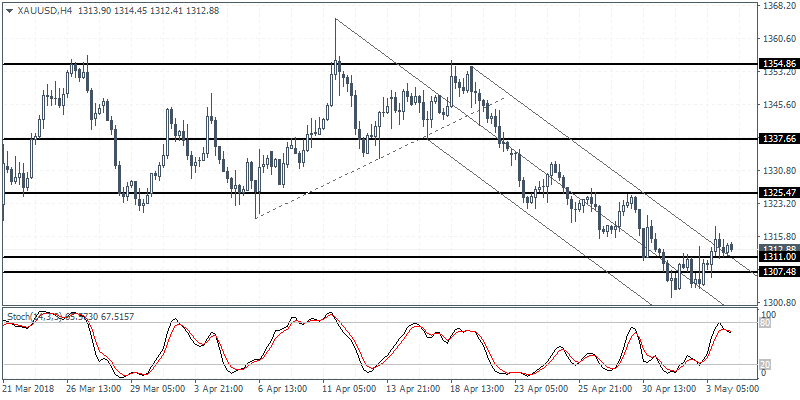 XAUUSD (1312.88): Gold prices managed to breakout above the price level of 1311 – 1307. A close above this support level now suggests a potential upside move in prices. The resistance level of 1325.50 remains a key level for price action to test. In the near term, we expect gold prices to remain range bound within the current levels. The support at 1311 – 1307 is likely to hold the declines in the near term. However, if this support level gives way, we could expect gold prices to drop toward the 1300 level of round number support.

Check out our blog for updates throughout the day.

Intraday technical levels and trading recommendations for EUR/USD for May 4, 2018