The markets were seen trading subdued on the day with price action staying rather flat. Economic data on Monday was quiet with only the Fed member speeches from Bostic and Barkin.

The Eurozone Sentix investor confidence was seen easing back for the fourth consecutive month, while the German factory orders report showed another month of decline at 0.9%. The previous month’s data was seen to be revised higher.

The German industrial production figures will be coming out later today with expectations pointing to a 0.8% increase on the month following a 1.6% decline the month before. German trade balance numbers are also expected during the day.

The Fed Chair, Jerome Powell is expected to speak early in the day. Powell will be speaking at a conference in Zurich. His speaking engagement comes a week after the Federal Reserve left interest rates unchanged.

Australia’s annual budget release is expected later although it is unlikely to be a major market moving event. In the U.S. President Trump announced that his administration would announce its decision whether or not to pull out of the Iran nuclear deal. Oil prices have risen steadily in anticipation of a U.S. pullout from the deal. 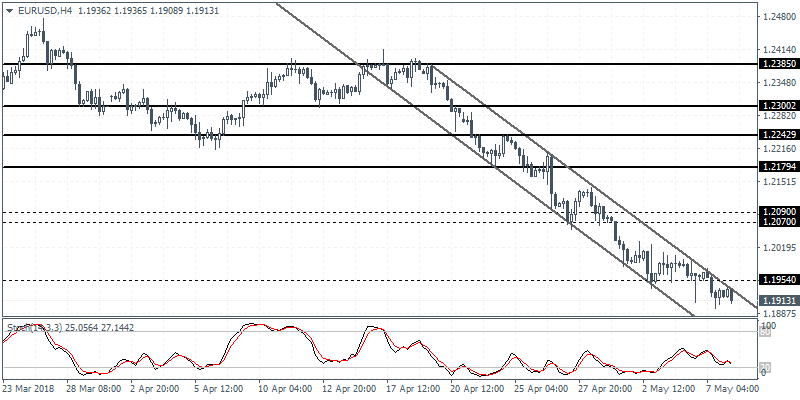 EURUSD (1.1931): The EURUSD was seen continuing to trade weaker but with price action trading in the support zone of 1.1960 – 1.1920, we could expect to see a reversal at this level. In the event that price action breaks below this support level, then we expect the declines to push lower toward the next main support level at 1.1730. Alternately, with the Stochastics currently showing a higher low against the lower low in price, we could expect a rebound. This can be confirmed on a daily close above 1.1954 level. 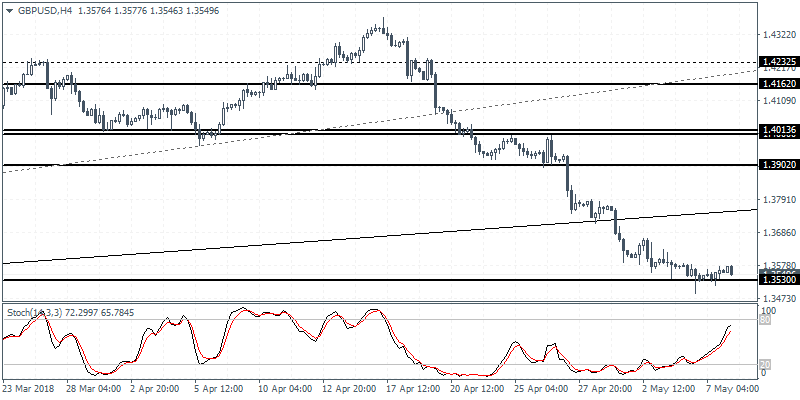 GBPUSD (1.3549): The British pound was seen consolidating near the support level for the past few days. We expect this sideways price action to remain in place heading into this Thursday’s BoE meeting. With the Stochastics showing a hidden bearish divergence, there is a strong possibility for GBPUSD to break down below the support level at 1.3530. In this case, further declines could push the GBPUSD lower to the 1.3000 round number support. To the upside, a close above the previous highs of 1.3580 is required in order to support any upside move. 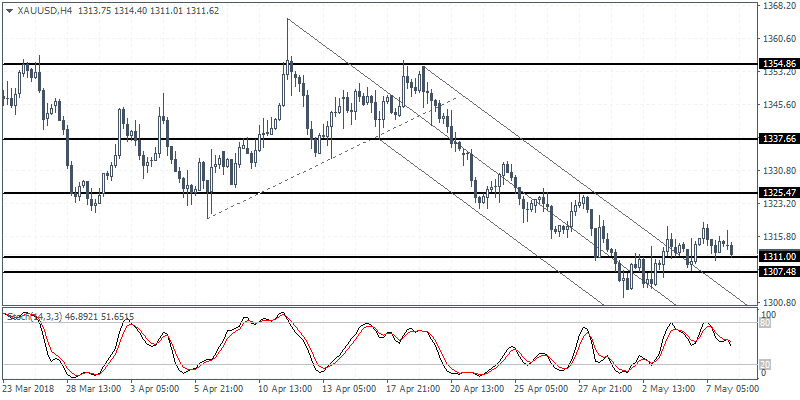 XAUUSD (1311.62): Gold prices gave up the modest gains logged in the previous day as price action was seen falling back to the support level of 1311 – 1307 region. We expect prices to remain consolidating at this support level. A rebound in gold prices could signal a possible move to the upside. The resistance level at 1325 is likely to be the upside target, unless gold prices breach the current support. A break down below the support level could send gold prices falling toward the 1300 level.

Check out the Orbex website for analysis released all through the day.