The FOMC meeting minutes released yesterday did not show any surprises even as the U.S. dollar weakened ahead of the meeting. However, members were seen to be hawkish as all members preferred to see higher GDP and inflation. There was also building consensus among the voting members for more rate hikes.

Investor sentiment was kept in check with developing global stories which included the U.S. President Trump threatening to take action against Russia in Syria while reports showed that Saudi Arabia had intercepted a missile over Riyadh.

On the economic front, data from the UK showed that manufacturing production fell 0.2% on the month with the previous month revised down to show an unchanged print. Construction output also declined 1.6% on the month while industrial production rose just 0.1%. The British pound however managed to maintain the gains.

Data from the U.S. showed that headline CPI fell 0.1% on the month in March but still the annual inflation rate rose to 2.4%. Core CPI which excludes the volatile food and energy prices rose 0.2% on the month as expected.

Looking ahead, the economic calendar today will see the BoE’s Broadbent speaking earlier in the day. This is followed by the final inflation figures from France. The main highlight of the day will of course be the monetary policy meeting minutes which will be released by the ECB.

The NY trading session is relatively quiet with only the BoE Governor Carney expected to speak at an event later in the day. 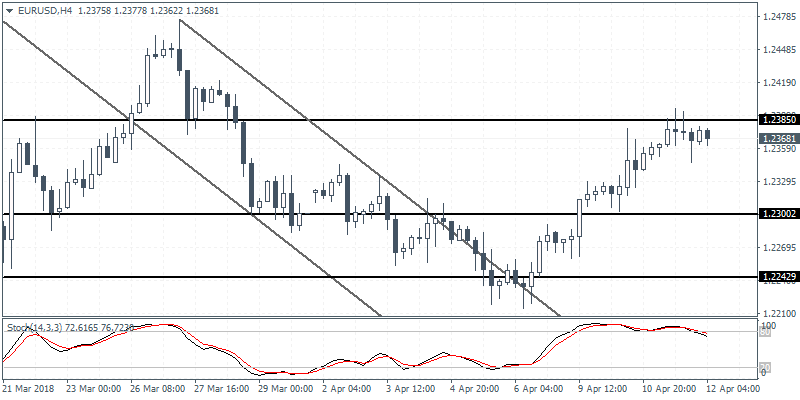 EURUSD (1.2368): The EURUSD rallied to the 1.2400 area before retracing the gains. The test towards the 1.2400 region comes after the euro currency posted gains for four consecutive days following the rebound off the 1.2241 level of support. On the 4-hour chart, the multiple retests near 1.2385 suggests that the momentum in price action might be slowing. We expect the EURUSD to ease back from the current highs and maintain a sideways range within 1.23385 and 1.2300 region. 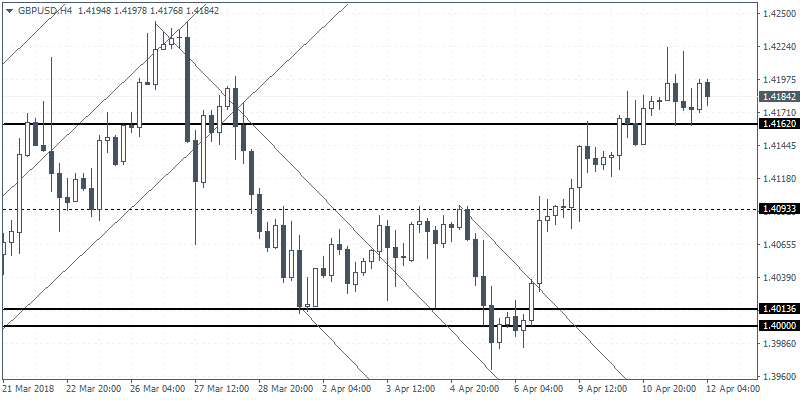 GBPUSD (1.4184): The British pound managed to hold on the gains after price broke past the 1.4162 level of resistance earlier this week. Price action has been consolidating above this level in the short term and we expect to see a retest of the breached support level. If support is established at 1.4162, then we expect to see further gains in store. Alternately, if the support at 1.4162 fails, GBPUSD could be posting a correction to the downside with a retest of the lower support seen at 1.4100. 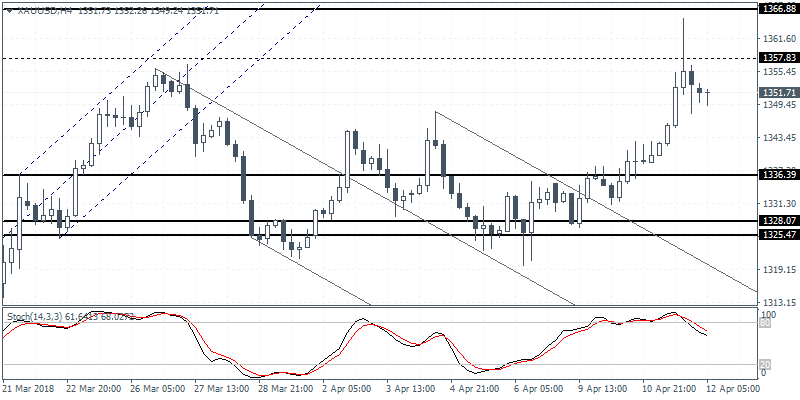 XAUUSD (1351.71): Gold prices posted strong gains yesterday supported by the ongoing uncertainty in the geo-politics. The precious metal rallied to test the highs of 1365.30 before easing back from the intraday highs. The reversal comes at a familiar level where previously gold prices retreated. To the downside, the declines could see gold prices falling back to test the lower support at 1336 level. To the upside, we expect to see some consolidation taking place near the minor resistance level of 1357.

Visit the Orbex website for more technical and fundamental analysis throughout the day.

Crude Oil Prices Surges After Tensions Rises Between US and Russia