The markets were seen trading mixed with the U.S. dollar showing signs of easing back on Monday. Economic data was sparse with only the speech by Cleveland Fed President Loretta Mester.

Speaking at a conference in Paris, Mester said that the Federal Reserve will most likely maintain its rate hike guidance for the year while at the same time tolerate an overshoot of inflation target. The comments however failed to push the U.S. dollar higher on the day.

Looking ahead, the economic data for the day will be dominated by the preliminary GDP release from Germany and the French final inflation rate. Later in the day, the UK’s labor market data will be released. Expectations show that the UK’s unemployment rate held steady at 4.2% in the three months ending April. Wage growth is expected to rise at a modestly slower pace of 2.7% compared to the 2.8% increase seen previously.

The Eurozone second revised GDP estimates will also be coming out today. The median expectations point to 0.4% increase, unchanged from the preliminary increase.

Economic data from the United States will see the release of the retail sales report followed by the Empire State Manufacturing Index. 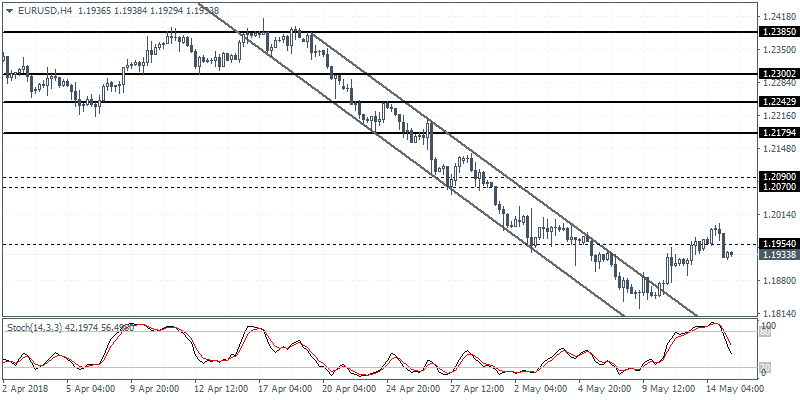 EURUSD (1.1933): The EURUSD rallied to a seven day high on Monday with price reaching intraday highs of 1.1963 before easing back on the day. The declines came off the highs as it coincided with the recently breached support level that has now turned into resistance. A bearish close below 1.1920 could potentially signal a near term decline in price. On the 4-hour chart, we see a hidden bearish divergence which is likely to signal the downside in price. A higher low being formed off this reversal could mean that prices are likely to rebound in the near term, provided the resistance level of 1.1920 – 1.1960. 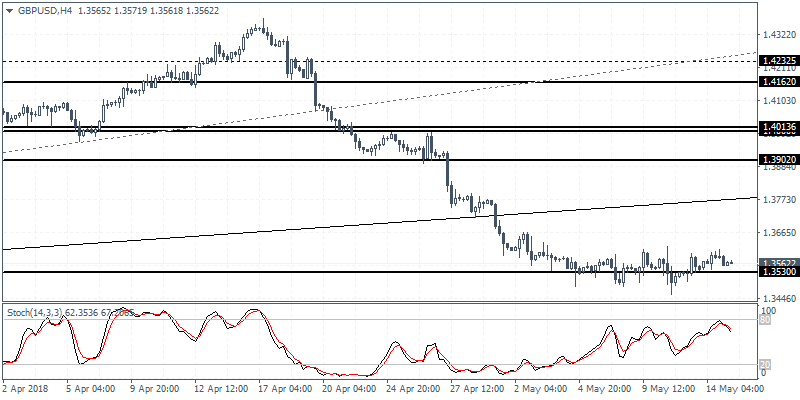 GBPUSD (1.3562): GBPUSD continues to trade flat with price action consolidating near 1.3530 level. The rather prolonged sideways movement is likely to trigger a volatile breakout in the near term. The support level at 1.3530 could hold the declines in the near term, with the downside breakout pushing prices closer to the 1.3500 level of support. To the upside, there is a strong possibility of a correction in prices with the initial target coming in around 1.3737 followed by the horizontal resistance level of 1.3902. 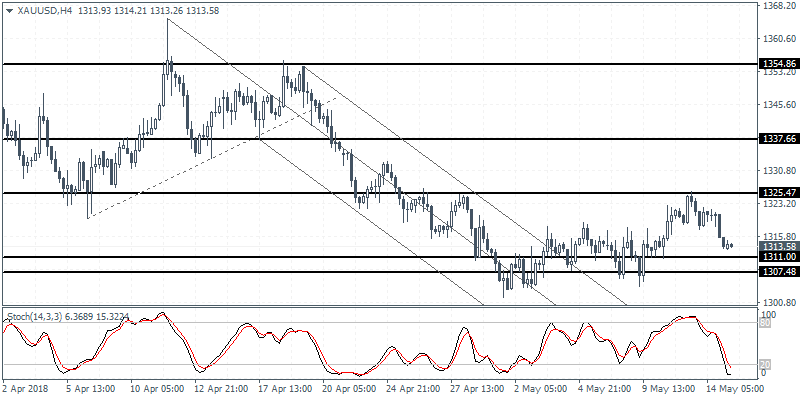 XAUUSD (1313.58): Gold prices continued to drift lower after testing the upper resistance level of 1325 previously. We expect the sideways range to be maintained within 1325 resistance and 1311 level of support in the near term. The 4-hour Stochastics oscillator currently points to a hidden bullish divergence. This could mean that price action will likely test the lower support of 1311 ahead of another rebound in prices. Unless gold prices break out from the range, we expect this flat trading to continue.

Check out the Orbex blog for more technical and fundamental release throughout the day.